HELENSBURGH'S Maggie Hamilton (1867–1952), a talented embroiderer and painter of flowers and still lifes, presents a fascinating case study of a woman artist at the turn of the century, who worked and exhibited prodigiously across the fine and decorative arts, and yet has now fallen into obscurity.

The only painting by her in a UK public collection is 'Alas, April the 30th' in Newport, Wales. The daughter of Mary Stevenson and James Hamilton, a prosperous Glasgow bobbin manufacturer, younger sister of Glasgow Boys painter James Whitelaw Hamilton, and wife of the prominent Glasgow architect Alexander Nisbet Paterson (younger brother of Glasgow Boy James Paterson), Hamilton is today eclipsed by her more famous male family members.

Her plight was summed up in the summers of 1883–85 when she was asked to keep house for James Guthrie and the Glasgow Boys at Dunglass, near Cockburnspath, in order that they could immerse themselves as artists, Bastien-Lepage style, in rural life.

However, Hamilton was doggedly determined and made opportunities for herself, exploiting wherever possible her contact with the Boys: she managed to paint while she kept house at Cockburnspath; and on the back of their success in Munich in 1890, exhibited in Germany 1891–1901.

As an artist, and later committee member of the Glasgow Society of Lady Artists (later Lady Artists’ Club), she also exhibited fifty-one paintings at the Royal Scottish Academy from 1889 (aged 22). Although denied membership as a woman, she nevertheless exhibited almost every year until 1943, predominantly oils (underpriced at £5 to £45).

She also exhibited an impressive ninety-two works at the Royal Glasgow Institute of the Fine Arts from 1890, dedicatedly exhibiting every year, sometimes two or three works at a time (the most she was permitted as a woman non-member), until 1944 (when she was aged 77).

The only exceptions to this were 1898, the year after her marriage, when Alexander made a tour of Italy and Hamilton may well have joined him, and the years 1906 and 1931 when she exhibited at the RSA; so they were by no means fallow years.

She even exhibited in 1899 and 1900, the years her children Viola and Alistair were born. Many other women artists were forced to interrupt their careers as a result of marriage, children, and home commitments. However, coming from a fairly wealthy background Hamilton was freed up by a nanny and other live-in staff at The Long Croft (the family home designed by her husband, with whom she collaborated on the interior decoration).

In Guthrie’s 1892–93 portrait of the artist in Glasgow Museums (left), Hamilton, wearing an elegant walking outfit, standing with hand on her hip, cane in hand (not a feminine parasol), cuts a fashionable and confident figure.

This was the woman who continued to exhibit after her marriage in 1897 as “M.HAMILTON”, although reviewers pointedly referred to her as Mrs A.N.Paterson.

Frustratingly, when Guthrie’s portrait was exhibited at the Society of Portrait Painters in London in May 1893, in the same room as Whistler’s portrait of the famous violinist Pablo de Sarasate (1884; Carnegie Museum of Art, Pittsburgh, PA) , it was much admired by critics but — in contrast to the musician — no mention was made of the sitter as an artist in her own right. 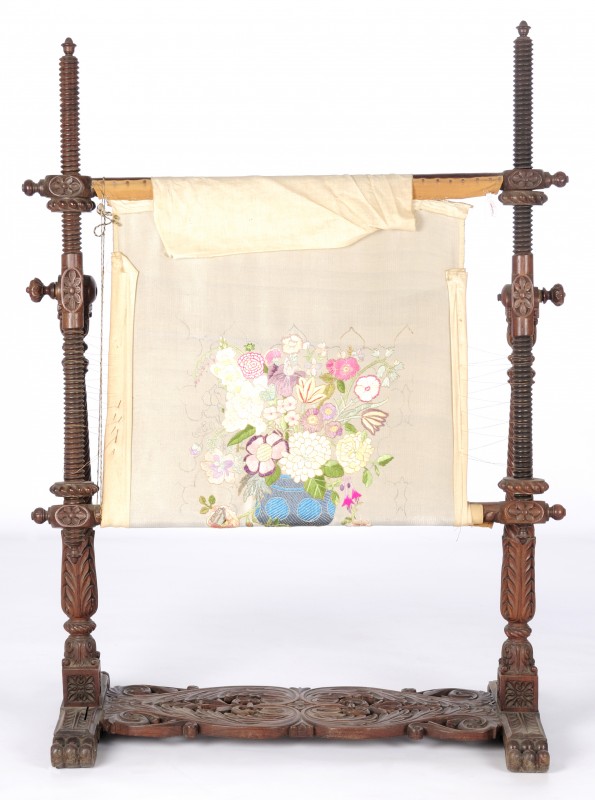 In 1935, Whistler’s portrait of his artist wife Beatrice, Harmony in Red: Lamplight (1884–86), a painting to which Guthrie’s makes visual homage, was given to the University of Glasgow as part of a substantial gift from the artist’s estate.

Perhaps with this in mind, Hamilton pointedly presented Guthrie’s portrait of her to Glasgow Museums in 1951, determined to have a legacy in the city.

In 1952, the year Hamilton died, Anne Redpath became the first woman artist to be elected a member of the RSA. It is only now, more than sixty years on, that Hamilton’s reputation is being re-established.

Hamilton’s will (Paterson Collection, Special Collections, University of Glasgow), shows that she intended one of her still-life paintings and several of her embroideries to be gifted to Glasgow Museums, unless the family made prior claim: “My own embroidered pictures if not retained may be offered to Kelvingrove and a still life of mine.”

It appears that her works were valued by the family and kept, although few remain in family hands today.

Hamilton’s daughter, Viola, did gift the museum some textile items in 1882, including an unfinished embroidery (above right) and fabulous hand-painted dress by her mother (left), but Glasgow Museums is now actively looking for further examples of her work to enhance its collection.

They would be displayed alongside works by Bessie MacNicol, Norah Neilson Gray, Stansmore Dean, and Jessie M. King, women who were collected by the museum as representing a generation of women artists who had studied at Glasgow School of Art, under the progressive leadership of Fra Newbery.

However, Hamilton importantly represents an alternative ideal, as the Art Journal pointed out in 1907, exemplifying those tenacious women artists and designers who for various reasons (usually lack of family support) did not go to Glasgow School of Art, but were self-taught or received their education informally at private drawing academies, like that of the Misses Park and Ross in Craigendoran.

These women deserve to be remembered, not only for their talent and individual flair, but for their sheer strength of will in continuing to design, paint, and exhibit against the odds.