Inscription on the grave of Comet skipper Captain Robert Bain in Rhu Churchyard: 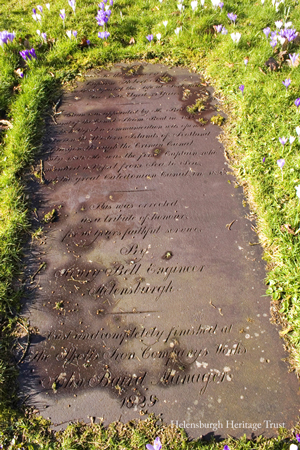 To the memory of
Captain Robert Bain

C R Bain was appointed by H.Bell to the command of the Comet Steam Boat in 1814 by which vessel communication was opened
up between the Western Islands of Scotland and Glasgow, through the Crinan Canal in July 1819. He was the first captain who commanded a Vessel from Sea to Sea, through the great Caledonian Canal in 1822.

This was erected as a tribute of honour for 16 years of faithful service, By Henry Bell Engineer Helensburgh.

Cast and completely finished at The Shotts Iron Companys Works.