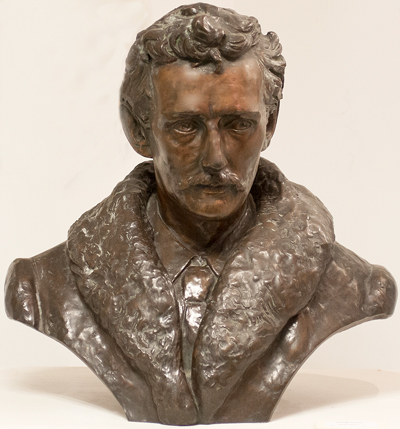 The strongly worked facial features of the bust — presented to the town by his son and daughter David and Margaret — are picked out well by the lighting. But who was Dr Ewing Hunter, and what did he do?

He was a man who had a profound influence on many aspects of the life and times of Helensburgh.

James Ewing Hunter was born in Northern Ireland on October 2 1863, the son of David Hunter of Cathcart and Jane Jardine Ewing.

In the early 1870s the family moved from Belfast to live in Helensburgh, perhaps because his mother’s family were associated with the town and were said to have lived in the Glen Fruin area in past centuries.

He graduated MB CM in 1888 then worked as an assistant in Lancashire before spending three years travelling. The countries he visited included Australia, Tasmania, New Zealand, Egypt, Greece and Turkey.

Dr Ewing Hunter came back to Helensburgh in 1891, living at Millig, 29 Colquhoun Street, and set up as a GP, and he spent the next fifty years in that capacity.

He took his turn with other local doctors working with patients in the town’s Victoria Infirmary.  But he also found time for a whole range of other activities and interests.

Almost certainly a founder member of Helensburgh Amateur Swimming Club, he was appointed president at the inception of the club in 1891, and filled that role until his death.

A separate club for ladies was formed later, as society in the early years would not tolerate the possibility of mixed bathing.

There was no town swimming pool until 1929, and most of the swimming was beside the pier. It was said that no swimming gala or club social function was held without his presence.

He quickly brought his unique stamp to bear by devoting much of his available time to the training of members in lifesaving and resuscitation of the apparently dead.

He took pride in the success of his lifesaving teams in national and international competition and himself was the holder of the National Life Saving Society’s bronze medal.

In commemoration of Queen Victoria’s Diamond Jubilee in 1897, Dr Ewing Hunter presented a challenge shield to the club to be competed for annually.

The winner was the fastest all-round competitor employing breast, back, side, and overarm strokes, and the trophy was still being keenly contested at the time of his death.

On New Year’s Day 1910, a handicap swimming race took place over 50 yards. While there is no proof that it was the brainchild of Dr Ewing Hunter, it must have had his blessing given his ‘hands on’ approach as president.

Described by the Helensburgh and Gareloch Times as “an innovation”, the race, which took place in a downpour, was won by David Rue and Gilbert Price in a tie for first place.

The race took place at the pier, and probably led to the now famous annual Helensburgh New Year Swim which later moved to Rhu Marina for safety reasons.

Dr Ewing Hunter always took a keen interest in the welfare of the youth of the town, and he was for many years president of the Helensburgh Association of Boy Scouts. 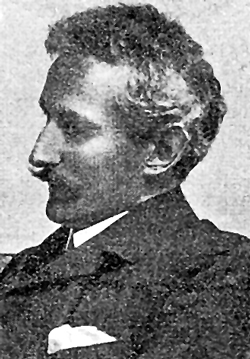 After the First World War, he and others were successful in obtaining premises for the Scouts and Girl Guides at John Street which are used to this day.

The Scout movement in Helensburgh had its ups and downs over the years, but Dr Hunter was always diligent in finding scoutmasters and doing his best to instil fresh energy and purpose.

In 1910 Dr Ewing Hunter was elected as a member of Helensburgh Town Council, serving for fourteen years during a very formative period in the history of the town.

Keenly interested in horticulture, it was perhaps inevitable that he should become convenor of the Parks Department, given his keen interest in horticultural matters.

He also took great pride in the garden at his home, and was always more than happy to show visitors his collection of rare shrubs and flowers, including Yucca gloriosa, or Spanish dagger, with its striking form and amazing show of flowers.

In his work with the Town Council, Dr Ewing Hunter was especially keen to promote the use of trees — such as flowering cherries — on the grass verges along the streets, especially in the upper part of the town, and his legacy can be seen today.

Not everyone agreed with his wish to see increased use of Laburnum — 33 trees were planted on Sinclair Street in 1913.

Although this small tree, a member of the pea family, has beautiful sprays of yellow flowers in springtime, it is very poisonous, as are its seeds contained in hanging pods, which present a possible temptation to children.

For that reason, its use for planting in public places is usually avoided nowadays. But many can be seen in private gardens.

Another part of the townscape where Dr Ewing Hunter made his mark was in the development of Hermitage Park, acquired by the Town Council in 1911.

He is credited with being responsible for much of the subsequent layout and planting, and for many years the park was renowned as a major attraction for residents and visitors alike.

So it was good news recently when £2m grant aid was awarded to the Friends of Hermitage Park and Argyll and Bute Council to restore the park to its former glory.

Early in the First World War the need to boost medicinal supplies became paramount, and a plan was conceived to help address this by increasing the supply of herbs with medicinal properties.

The garden area of Hermitage Park was thought suitable for such use, and here again Dr Ewing Hunter played a key part.

Dunbartonshire Herb Growing Association was formed in 1916 under the control of a committee, of which Dr Ewing Hunter was a member, later becoming chairman from 1919 until the wind-up the following year.

Deadly Nightshade and Thorn Apple, two members of the potato family, were among the herbs grown. While both are very poisonous, they contain substances with important medical applications.

Art was another keen interest, and Dr Ewing Hunter was no mean artist himself. On at least one occasion he exhibited pictures at the Glasgow Institute of the Fine Arts.

His interest was perhaps heightened by the fact that he was related by marriage to at least one notable painter, Bessie McNicol, most prominent of the so-called ‘Glasgow Girls’, and the subject of a biography by the late Ailsa Tanner, also a local artist.

Dr Ewing Hunter’s wife, Margaret Frew, whom he married in 1898, was sister-in-law to Bessie, who painted a fine portrait of her, simply entitled ‘Margaret’.

Another great love in his life  was antiquarian studies and natural history.

When Dumbartonshire Natural History Society was formed at the end of 1913, he was the natural choice for president, and he continued in this role from the outset until the end of the organisation in 1933.

In a tribute after his death, long-serving secretary Elizabeth Ewing said: “There was only one occasion when he was absent and this was through illness.

“He was an ideal chairman, always ready to supplement the proceedings with information and kindly criticism.

“He was a man of wide sympathies and generous friendships, not least to his own town, which he did so much to beautify. Surely the look of the streets of Helensburgh will annually be a tribute to his memory more wonderful than any requium!”

With the acquisition of Hermitage House along with the Park in 1911, the Town Council was at a loss what to do with the mansion, and it is likely that Dr Ewing Hunter was behind the 1913 proposal that it be used to house museum objects.

These would include artefacts obtained by the newly-formed Natural History Society, which was also granted a room for meetings.

The house was used for this purpose until it was requisitioned for use as a hospital for wounded servicemen during World War One.

The tireless Dr Ewing Hunter was also a lover of the Highlands, and was keen to promote Gaelic language and culture. He was instrumental in forming the Helensburgh and Clan Colquhoun Highland Association, and served as president for many years.

On the political front, he was for many years a member of the executive council of the local branch of the Primrose League, which advocated Conservative policies, and served as local secretary for five years

He was an enthusiastic Freemason, and was connected with Helensburgh Lodge St George No.503.

Other roles included being a Justice of the Peace and a Special Constable, and for some years he taught first aid to local members of the Air Training Corps.

Dr Ewing Hunter died at home on Saturday October 25 1941 in his 79th year after a long illness, and was survived by his wife, son and daughter.

The funeral took place at St Columba Church, with the Rev. J.W. Walker and the Rev. A.D. Barr officiating.

Among those present were Sir Iain Colquhoun of Luss and representatives from the Town Council and various organisations, along with relatives and friends.