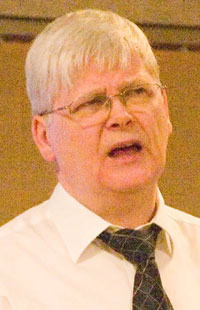 The workshops, conducted by Dr Douglas Brown of Strathclyde University (pictured), ran during May and June 2004.

It was a fortunate coincidence that Dr Malcolm Baird (son of JLB) was in Helensburgh during June as part of a promotional visit in connection with "Television and me", an autobiographical book which has a lot of the text of JLB's previous autobiographical book "Sermons, Soap and Television" but a preface has been added. There is a better selection of pictures and many footnotes.

Dr Baird attended the workshop in Colgrain School and, later, the A.G.M. of the Helensburgh Heritage Trust.