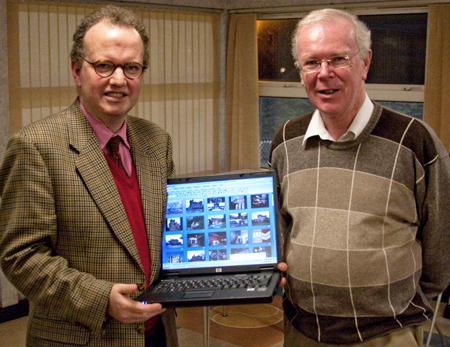 THE continuing decay of the former St Peter's Seminary at Cardross was lamented by an expert in historic buildings at the October open meeting of Helensburgh Heritage Trust at Helensburgh Tennis Club.

Simon Green, of the Royal Commission on Ancient and Historical Monuments of Scotland, travelled from Edinburgh to give a talk on some of the buildings of interest in the Clyde area.

Mr Green, who is also an expert on the work of architect William Leiper who designed several mansions in the Helensburgh district, explained that the Commission — which celebrated its centenary last year — undertakes a lot of research into and recording of important Scottish buildings and has collections of plans and photographs.

As part of a talk looking on the Clyde as a thoroughfare, he began with photographs of the now demolished Kilmahew House at Cardross and went on to discuss the seminary for Catholic trainee priests designed by Gillespie, Kidd and Coia, built in the grounds from 1961-6, and closed in 1980 when it became a drug rehabilitation centre.

“St Peter's College is an incredibly important building in the history of modernist Scottish architecture,” he said. “It is difficult to love, but fascinating. It remains a major problem, and I don't think it will ever be solved. Probably the building will just continue to decay.”

Mr Green, who was introduced by Trust president Stewart Noble, spoke about and showed historic photographs and plans from the Commission's archives of a number of properties in the town and district.