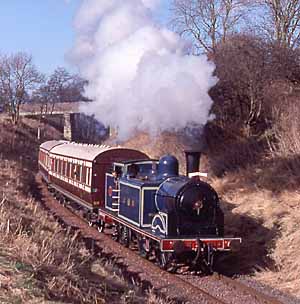 Tony Dance writes: “The BKR is a working railway operating under the same regulations as the national rail network.

“Our safety critical staff (footplate, signalman and guard) are trained to national standards. The exams I sat to drive Diesel locomotives are to the same standard as the mainline drivers, albeit on different classes of locomotives.

“There are only a few thousand people left in Britain who now regularly work standard gauge steam locomotives. Thanks to the staff at Bo'ness, I have the privilege of being one of their number.

“Our Scottish Railway Exhibition is one of the ten core collections of national importance to Scotland and, on a slightly quirky note, we have on site ‘B’ listed buildings built less than twenty years ago.

“We are therefore steeped in heritage and a working museum depicting a transport system built during the great  days of Scottish industry. We run training programs for new recruits into the heritage workings of a transport system of a bygone age and let children of all ages experience ‘The Power of Steam’.”

The picture from the SRPS website shows CR 419, which was built by the Caledonian Railway Company at St Rollox Works, Glasgow, in 1907.

The class was designed by J.F.Macintosh for branch line and suburban work. Following withdrawal from service by British Railways in the early 1960s, the 'Caley Tank' was one of the first locomotives to be acquired by the SRPS and is the Society's emblem.