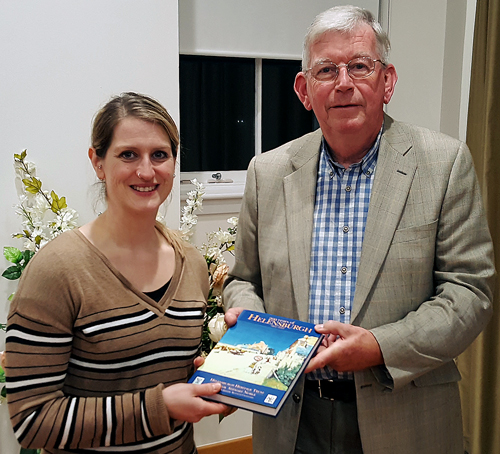 The speaker at the meeting in Helensburgh and Lomond Civic Centre in East Clyde Street on Wednesday January 29 was Suzie Reid of the National Trust for Scotland, who was accompanied by Hill House helper Tayla Egbers from Helensburgh, Australia.

Suzie has been the Group Conservator for Glasgow and the West of Scotland since 2008.

A graduate of the University of Lincoln, she previously worked for Liverpool Conservation Centre and Glasgow Life.

She was introduced by Trust chairman the Rev David Clark, and told the meeting there was evidence that the Hill House had problems with damp penetration almost from day one.

Suzie outlined the architectural tastes of Walter Blackie, the man who commissioned Charles Rennie Mackintosh to design both the interior and exterior of the Hill House. He disliked red tiles on the roof of a house and the half-timbered white and black effect on the outside of a building was not to his taste either.

Interestingly, these were some of the main features which architect William Leiper included in Morar House which was being built just across Upper Colquhoun Street from the Hill House at almost exactly the same time.

On the other hand Walter Blackie liked traditional slate roofs and grey harled walls, and so Mackintosh and his wife Margaret were given pretty much free rein to design the exterior and interior of the Hill House within these parameters.

Most of the Hill House is constructed of sandstone, but unfortunately it was of poor quality, with the suggestion being made that this was because the quarry used was coming towards the end of its life. Furthermore, in some places the sandstone was inserted vertically rather than horizontally. This alignment of the strata within the sandstone was to add to the problems of later damp penetration.

Because he believed that the Portland cement would be 100% waterproof, Mackintosh felt that he did not need to use many of the traditional means of shedding water which are employed in the damp climate of the west of Scotland. Consequently the Hill House was built without the large roof, the window sills and the chimney pots to be found in other houses of the same age in Helensburgh.

Furthermore the downpipes from the gutters were encased within the cement harling. Lastly, around 30 cm of harling was applied to the sandstone; this is very thick by modern standards.

Unfortunately at that time it was not appreciated that sandstone could "breathe" and could expand and contract, and this was one of the causes of cracks appearing in the cement harling. Consequently damp could get into the sandstone through the cracks in the cement, but could not get back out again. All this moisture within the stone made the house cold and the Lawson family, the last private owners of the Hill House, complained that they could never get the house warm.

When the National Trust for Scotland acquired the Hill House in 1982, they appreciated that there were problems with damp in the building, and so they very quickly carried out some major repairs.

However Historic Scotland intervened because they were concerned that the National Trust was removing too much of the original materials used in the building, and that this could lead to a lack of authenticity. Consequently the National Trust pulled back somewhat on the repairs which they were carrying out.

Because of problems with the building, quite extensive changes had actually been made to the Hill House during its life before it was acquired by the National Trust. So it could be argued that Historic Scotland was somewhat late in attempting to apply the conservation principle of retaining as much original material as possible.

In 2014 ICOMOS — the International Council on Monuments and Sites — produced a report entitled "Heritage at Risk". This moved the guiding principle for the restoration of historic buildings away from a concern with maintaining the fabric of a building, and more towards its design. This in turn led to a reappraisal by the National Trust of what might be done with the Hill House.

Following the receipt of a grant from the Gettys and an appeal for funding, it was decided to protect the Hill House and to let it dry out by building "The Box" around it. Construction took place in 2019 and cost around £4 million.

The Box has a solid roof, but the walls are in effect chainmail; no-one else has ever put such a structure over a building before. The National Trust reckons that The Box will reduce water ingress by 60 to 80%.

There are concerns that, if the building were to dry out too rapidly, this might cause some of the interior plasterwork to fall off – and of course much of the plasterwork is covered by Mackintosh's stencils. Consequently the heating system now being used in the Hill House is determined by the level of humidity in the air rather than by the temperature; this means that the building can sometimes feel a bit chilly.

The Box has planning permission for five years but, in response to questions, Suzie agreed that it could be in place for considerably longer – and in fact might even become a permanent feature. Meantime it has not been decided what form any restoration of the building might take once it has dried out.

The vote of thanks was proposed by Trust director Robert Ryan.