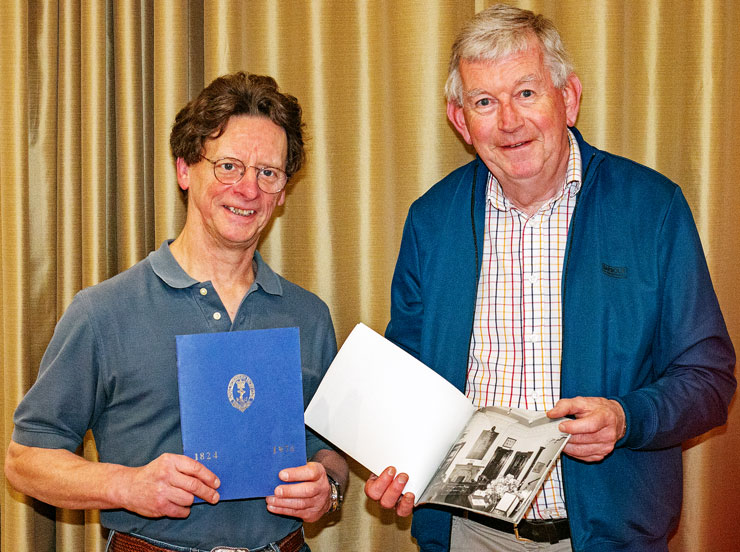 AN EXHIBITION of memorabilia and photographs from the Royal Northern and Clyde Yacht Club has opened in the community area at Helensburgh and Lomond Civic Centre in East Clyde Street.

It was compiled for Helensburgh Heritage Trust by the yacht club’s archivist for the past five years, Jon Reid, and will be open for the next few months.

Mr Reid was the guest speaker at the Trust’s final open meeting of the 2018-19 winter season in the adjoining Marriage Room on March 27, and there was a good attendance to hear him relate how three yacht clubs were formed and finally all came together as one club.

​Mr Reid stressed that in the early days yachting was a royal pastime enjoyed by the extremely rich. Until 1865 membership of the Royal Northern required ownership of a yacht more than eight tons.

After lengthy consideration a clubhouse — actually part of a hotel — was opened in Rothesay in 1878 which became the base for the club's regattas.

The club moved to the current clubhouse in Rhu in 1937, merging with the Gareloch Yacht Club.

The Royal Clyde Yacht Club started life as the Clyde Model Yacht Club in 1856 and was established to cater for owners of yachts less than eight tons in direct response to the RNYC's threshold for membership.

The club became the Royal Clyde Yacht Club after being granted a Royal charter in 1863, and a grand clubhouse was opened at Hunter's Quay in 1872. However the changing economic climate and reduction in steamer services led to the clubhouse becoming impractical.

During the early 1950s the RCYC moved to a smaller base at Rhu Marina until the merger with the Royal Northern in 1978.

​Both clubs grew with the economic development of the Clyde area, and they dominated the Scottish yachting scene from the late 19th to the early 20th century with grand regattas from May to September each year.

Their membership included many of the major industrialists especially in shipbuilding and thread-making, and many were members of both clubs.

The clubs were active in international competition. In 1886 the RNYC yacht Galatea challenged for the America's Cup. The following year a consortium of RCYC members challenged with the G.L. Watson-designed yacht Thistle.

Between 1922 and 1939 the RNYC scored seven wins in the British-American Cup with the yachts Coila III, Caryl, Saskia and Circe. ​The first London Olympics were held in 1908 and the 12-metre yachting gold medal was won by the RCYC yacht Hera. RNCYC member Luke Patience won silver in the 470 class in the London 2012 Olympics.

The club’s peak was the 1970s, when it had some 1,400 members, but today the membership is 400. It hopes eventually to move to a smaller purpose-built clubhouse at Rhu Marina, with better access to the water.

Mr Reid was introduced and thanked by the Trust’s chairman, the Rev David Clark. The first meeting of the 2019-20 winter season will be held at the same venue on Wednesday September 25.