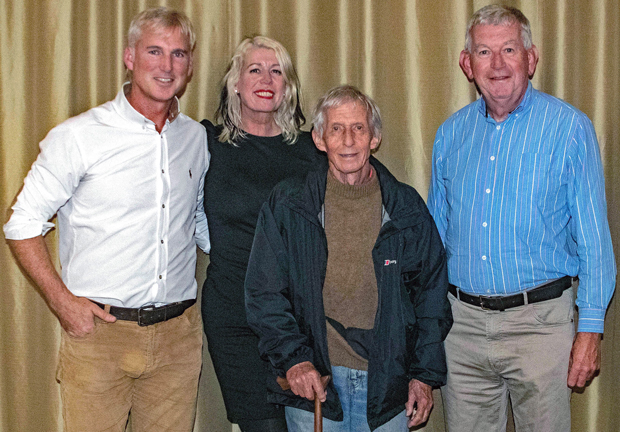 THE Mackintosh Club in Helensburgh town centre tells a significant historical story . . . but it also has a bright future.

In just two years Kilcreggan architect Bruce Jamieson and his wife Nicola have not only revived the first complete building designed and built in 1894 by the world-famous architect and artist Charles Rennie Mackintosh, but also set it on a path to be a major tourist attraction.

Not only were Nicola and their son and daughter present to hear Bruce address Helensburgh Heritage Trust’s first open meeting of the 2018-19 winter season in the Civic Centre on Wednesday evening, so too was his father Walter, home from Lombok, Indonesia, where he has lived for the last 40 years.

A retired civil engineer, he has relocated to the UK to be nearer to his family, but still has interests in Lombok including rice fields, mango and cashew plantations.

After being introduced by Trust chairman the Rev David Clark, Bruce marked the 150th anniversary of Mackintosh’s birth by telling the story of what he called the ‘pretty grand building’ at 40 Sinclair Street — a story hidden for many years and only now being fully discovered.

Funded by the Kidston family, it was built on the site of a former warehouse and officially opened in December 1895 as a clubhouse for the Helensburgh and Gareloch Conservative Club — and Kidston relative Andrew Bonar Law, later to be Prime Minister, was on the building committee.

In the audience at the meeting was Penny Johnston, the last member of the Kidston family living locally.

The red sandstone building contains many features which can be seen as forerunners of Mackintosh’s greatest building, Glasgow School of Art.

It originally had two shops on the ground floor to generate revenue for the club, the first floor had reading and smoking rooms and a large hall for public meetings, and the attic storey housed the billiard room and the caretaker’s offices.

This top floor was what the couple managed, after six years of trying, to purchase from M & Co at auction in 2016, both to restore it and use it as a working office for his architectural practice.

Already they have turned it into Helensburgh's Creative Hub for Architecture, Art, Design and Music — a gallery and arts venue which celebrates Mackintosh, his wife, and the other two members of the 'Glasgow Four' with both permanent and visiting exhibitions.

It is available to hire for private functions, exhibitions and performances, and is already much visited by Mackintosh enthusiasts of all ages and used for a wide variety of events.

Bruce said: “The building is part of the Mackintosh jigsaw, and it explains a lot of what this inspiring figure in Scottish architecture subsequently developed. It has been a hidden story, but it is all gradually coming to light.

“The top of the building is most interesting, but we still need to sort the leaking roof! There we hope to create an open area where people can look out at the town centre and the magnificent views in all directions.

“We will continue to maximise the interest and use of the top floor, and we have ongoing discussions with the two owners of the rest of the building about possibilities for the future.”

The vote of thanks was proposed by Dr Nigel Allan, a director of the Trust, who congratulated the couple on their wonderful voyage of discovery in restoring the club.