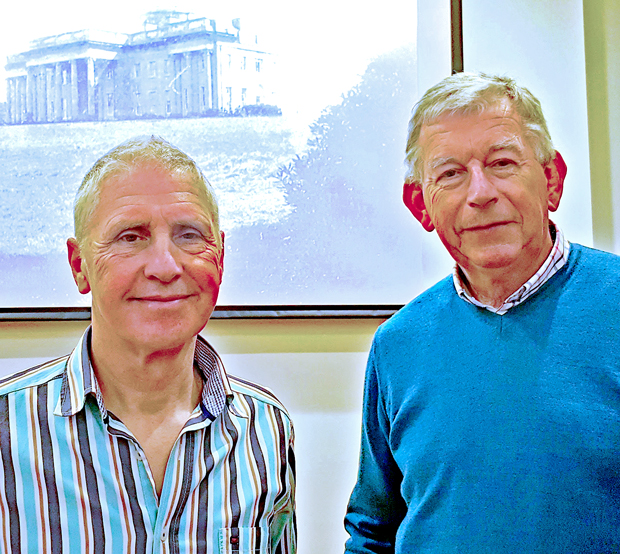 A BRIEF illustrated history of the Rosneath Peninsula was the topic at Helensburgh Heritage Trust’s final 2017-18 winter open meeting in Helensburgh and Lomond Civic Centre on Wednesday March 28.

The guest speaker was Richard Reeve, a Kilcreggan resident since 1984 when he arrived to work at Faslane. He retired in 2010.

Always interested in local history, Richard wrote the 468-page ‘A Victorian Burgh’, the history of Kilcreggan, in 2005, and was co-author in 2015 of a heritage trail leaflet produced by the Rosneath Peninsula West Community Development Trust.

He spends a considerable time as a director of Cove Burgh Hall, which he has been since the community took it over from Argyll and Bute Council in 2001.

His talk particularly featured the Dukes of Argyll and Rosneath Castle.

He told the well-attended meeting: “Early records tell us that Rosneath was a Barony. It had the prerequisites for estate management — a church, a Clachan, a castle, a Tom a Mhoid and a gallows hill for the dispensation of the King’s Justice.

“It was granted by the Crown to Colin Campbell, 1st Earl of Argyll, on January 9 1489 to support the security of the crown.

“Archibald, the 3rd Duke of Argyll, improved the Rosneath estate along with his Highland capital at Inveraray.”

He said that after the original Rosneath Castle at Castle Point burned down in 1804, a new castle was built by the then Marquis of Lorne, who later became the 6th Duke of Argyll.

Impressive estate offices and stables in the gothic style were built, followed by the new castle, Rosneath House, designed by Joseph Bonomi. However, by this time the Dukedom’s finances were in decline.

In 1848 feuing of plots along the western shores of the Peninsula was started by the 8th Duke of Argyll. The development included early examples of the work of Alexander ‘Greek’ Thomson and other prominent architects of the day.

The Rosneath Peninsula had a large summer population. So too did Cove and Kilcreggan, which became a burgh for civil administration in 1865.

The peninsula became a popular destination for excursions by day trippers from Glasgow using train and ferry links.

The 8th Duke’s son, the Marquis of Lorne, married Princess Louise, the fourth of five daughters of Queen Victoria.

She spent much time over her later years at the Rosneath estate and The Ferry Inn at Limekiln Point on the west side of Rhu Narrows, designed by Edwin Lutyens, was built for her.

Princess Louise died in 1939, and after World War Two the estate was sold and then auctioned off in smaller lots. Rosneath Castle was demolished in 1961.

Richard (left) was introduced and thanked by Heritage Trust chairman David Clark, who said that the 2018-19 series of open talks would begin on Wednesday September 26.