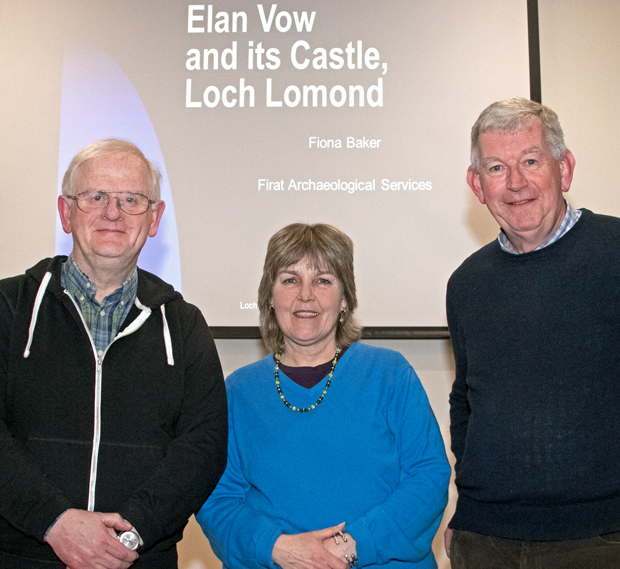 INTERNATIONAL funding has enabled real progress in a project to restore a castle on Loch Lomond’s most northerly island.

Chemical engineer Bruce McFarlin from Houston, Texas, first visited the island of Elan Vow, opposite the Sloy Power Station, in 1994 with his elderly father.

In 2012 he and his archaeologist daughter Katherine set up the Elan Vow Preservation Fund, which he chairs, to seek cash from all possible sources to fund the project, and work began to restore the small castle and island.

Fieldwork undertaken by professional Scottish archaeologists with support from the Loch Lomond and Trossachs National Park has resulted in fallen trees and plants being cleared from the overgrown island and the castle walls being revealed.

Archaeologist Fiona Baker, of Firat Archaeological Services in Rhu, described the project to the annual joint meeting of Helensburgh Heritage Trust and the North Clyde Archaeological Society in Helensburgh and Lomond Civic Centre in East Clyde Street on Wednesday March 21.

A systematic survey of the island was undertaken by Fiona from 1995-8, and in 2007 the Friends of Loch Lomond asked the archaeologists to return.

It was the seat of the clan after the larger castle at Inveruglas was burned by forces loyal to Cromwell in the mid-17th century, and it remained the seat until the end of the 17th century.

After that the castle — which has three floors, a large cellar, and a turret at one corner — was used as an elegant house and garden. It is thought up to 40 people may have lived on the island.

The MacFarlanes moved to the mainland near the end of the 17th century and abandoned the island sometime in the 18th century. The castle became a substantial family home but it is not known when it was last inhabited.

The poet William Wordsworth visited the island in the early 1800s and wrote ‘The Brownie’s Cell’, inspired by the vaulted basement, which is sometimes referred to as a dungeon.

Fiona said that by last year sufficient vegetation had been cleared to enable the remains of the sandstone castle and its cellar to be seen.

“It has been given a serious haircut!” she said, “But we haven’t removed all the vegetation, so as to preserve the building. Basically the castle can breathe again, and now we have made detailed drawings of the castle.

“The next phase is to raise the money so we can do actual preservation work — we just want to make sure it does not fall down — and we hope a proper excavation will follow.”

The island, whose ownership is under dispute, is protected by the Scottish Government under the Ancient Monuments and Archaeological Areas Act 1979.

The castle is of national and international importance for its historical associations with the MacFarlane chiefs and for the potential of its above and below ground archaeology as a representative example of medieval island strongholds.

A 3D model of the castle can be seen at http://www.islandivow.org/3d-modeling.html.

A photo of Elan Vow taken by Trust director Robert Ryan when he visited the island in 2010.