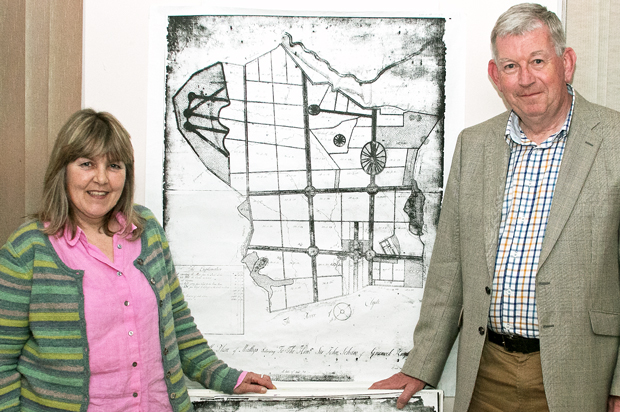 THE beginnings of the town of Helensburgh was discussed at Helensburgh Heritage Trust’s final winter open meeting of 2015-16 on Wednesday evening.

The speaker was Rhu archaeologist Fiona Baker of Firat Archaeological Services, who invited the audience in Helensburgh Tennis Club to agree with her theory that Boutcher’s Banks were the genesis of the burgh.

She showed a plan for the Barony of Millig based on squares and rectangles produced by surveyor William Boutcher of Comely Bank in Edinburgh in 1732. He worked in the French style, which was the custom of the time, and his design reflected and incorporated medieval feu boundaries.

Mallig, as it then was, belonged to the Hon Sir John Schaw of Greenock. Boutcher’s map produced for him showed tree-lined avenues and rondels, with lanes running out like the spokes of a wheel.

Helensburgh was developed on its famous grid system by Sir James Colquhoun, who bought the land in 1756. In 1776 he employed surveyor Charles Ross, at which time a different style of landscaping was popular, and advertised plots for sale.

The new town began slowly, with only 17 families living there by 1791. It became a Burgh of Barony in 1802, and steadily grew from that point.

Fiona, and Heritage Trust director and historian Alistair McIntyre, believe that a great deal of work was done in accordance with the Boutcher plan, and that there exist today in the Helensburgh area many traces of that work.

Alistair, who was in the audience, recognised a number of elements on the ground, and Fiona identified others.

These include tree-lined avenues, and the Old Luss Road to the east of the town and the Highlandman’s Way to the west.

What appears to be the policies of a mansion house in the map may correspond to part of Hermitage Park, and the nearby Mallig Mill, which dated from the 13th century, featured on the map.

The Scots Pine plantation beside the golf course is a belvedere, a feature sited to take advantage of a scenic view, and it is bisected by Old Luss Road — exactly as Boutcher conceived.

“He was also a nurseryman, and would want to sell trees,” Fiona said.

The hillside north of the town reservoirs can be seen to show a grid system of banks and ditches running diagonally which follow those laid out on the map. The date of 1732 is carved on a cup and ring marked rock.

Fiona was introduced by Trust chairman the Rev David Clark, who also proposed the vote of thanks.