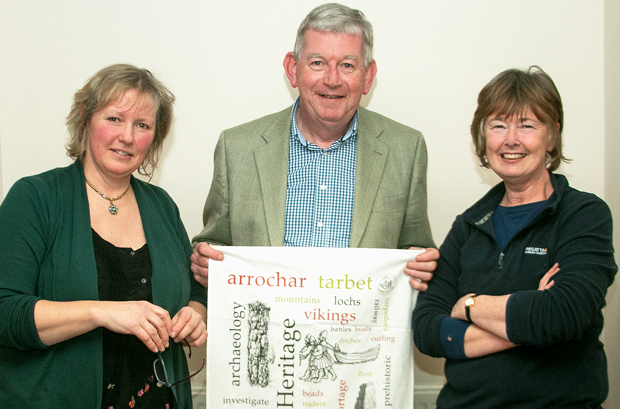 THE STORY of a research project into Vengeful Vikings and restless rustlers on the isthmus between Arrochar and Tarbet was described to a packed Helensburgh Heritage Trust meeting at Helensburgh Tennis Club on Wednesday February 24.

In a talk entitled ‘Trowels and Tea Towels’, Fiona Jackson and Sue Furness spoke about the ongoing Hidden Heritage project begun in January 2013 and supported by Arrochar and Tarbet Community Development Trust.

Fiona said: “We wanted to research the archaeology and history of the narrow strip of land between the two villages, and to get more local people — including primary and secondary pupils — interested in their own heritage.

“The Vikings attracted people’s interest, but we wanted to find out more about anyone who lived there. We wanted to rediscover its past, understand its present and celebrate its future.

“The isthmus was used by Vikings to portage their boats from Loch Long to Loch Lomond, by MacFarlanes to grow their crops, by drovers to take their cattle to market, and by Victorian tourists keen to experience the Scottish Highlands.

“Of course the results of our research had to be recorded properly, so it was vital that the volunteer helpers were well trained. But we also produced a book and leaflets, set up a website, and designed and created tea towels.”

Sue said that the project began with workshops in the village hall, then a walkover survey of the land which identified over 200 unrecorded features and also five sites to be excavated later.

In the school playing field, excavation resulted in over 50 pieces of worked flint being unearthed which experts said were either from the Neolithic or Bronze Ages.

Their star find there was an amber bead, worn round the neck to bring luck in the period from 1780 to the 19th century, and there was evidence to suggest the site was in use in the 1600s.

Another excavation site was opposite Ballyhennan Church, a circular area with a wall round it about which there were various stories. The archaeologists named it 'the jelly bean' because of its shape.

Excavation confirmed that the wall was not high enough for it to be a sheep enclosure, but there was no evidence of any building inside it or of any burials. The conclusion was that the wall was designed to keep things out, not in.

The project held a well-attended Open Day at this site, and a specially prepared Viking ale was prepared and sold.

A mound near the War Memorial was investigated, but Sue said that it appeared to be a natural glacial mound — not the burial place of a Viking ship.

Fiona told of the research at Ballyhennan Graveyard, which revealed some hardy and interesting old gravestones.

One particularly intriguing one was dated by experts to be from the 15th century, with various decorations and patterns on the slab, including a maze shape at one end and a sword at the other.

She said: “As for the Vikings, Glasgow University confirm that, as in the old story, Vikings did pull boats across the isthmus in 1263, and recently a Viking cemetery has been found at Carrick Golf Club beside Loch Lomond — and this perhaps may be of international significance.”

She added: “We had an exciting time with this project, but literally have only scraped the surface.”

The project and website was part-financed by the Heritage Lottery Fund and also by the Scottish Government and the European Community Argyll and the Islands LEADER 2007-2013 Programme.

It was awarded a ‘highly commended’ in the prestigious national Marsh Award for Community Archaeology.