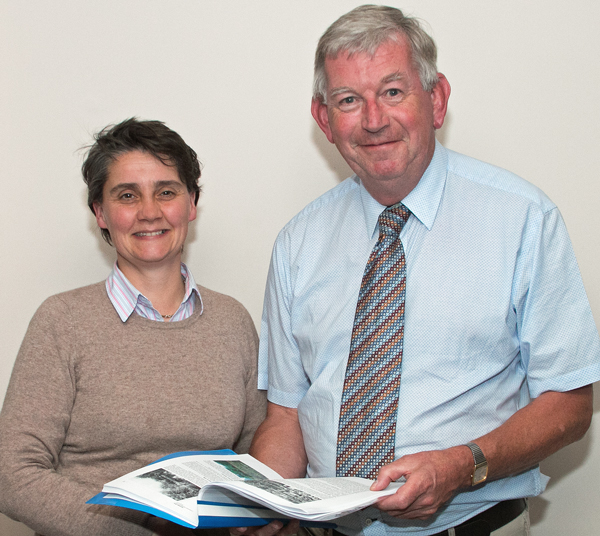 DECEMBER 15 is D-Day for the ambitious £2.5 million plan to refurbish and improve Helensburgh’s Hermitage Park.

That is when the Heritage Lottery Fund will announce its decision on the stage two application by the Friends of Hermitage Park in partnership with Argyll and Bute Council for a grant of that amount.

“Is there a plan B if the application is refused?” development officer Melissa Simpson was asked at Wednesday evening’s first meeting of the Helensburgh Heritage Trust winter open meeting series at Helensburgh Tennis Club in Suffolk Street.

The question was posed by Trust director the Rev David Clark, who chaired the meeting and proposed the vote of thanks, and the answer was “No.”

Melissa, who first worked for Leeds City Council and has since worked at London’s Kew Gardens and for the National Trust both in England and Scotland, is currently on a six month contract with Argyll and Bute Council.

Her topic was ‘Hermitage Park: past, present and future’, and she used a series of maps to show how it developed.

She told how the Milligs Mill, also known as the Malig Mill, which formerly existed at the bottom of the park and was demolished in 1922, was first mentioned in 1225.

The first person recorded as miller was in 1776, and in 1838 the mill water produced 800 gallons of whisky a week.

The area was gifted to the then Town Council and became a park in 1912, and from 1914 performances were given in a rustic bandstand. For a time there was a children’s sandpit.

During World War One Hermitage House was a military hospital, and poisonous plants — used to produce drugs to treat wounds — were grown in the gardens and tended to by girl pupils of St Bride’s (now Lomond) School.

In the 1990s the state of the park deteriorated, and by 2010 the Friends of Hermitage Park organisation had been formed and began undertaking improvements and looking at a major project.

Melissa described the master plan to improve the park, build a new pavilion, provide good lighting, provide a pool, add to the plant collection which already numbers 352 varieties, deal with some Japanese Knotweed, and enhance the war memorial garden.

“We have a ten year management plan, and hope a park manager and assistant can be appointed to work with the Friends and other volunteers,” she said.

“We actively want to involve as many people as possible, and I feel sure that if the Heritage Lottery Fund gives us the funds, the park has a fantastic future.”