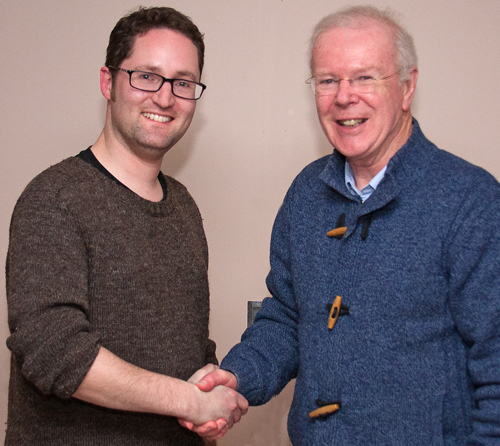 THE inter-linked stories of St Peter’s Seminary and Kilmahew House in Cardross fascinated a large attendance of members at the Helensburgh Heritage Trust January Open Meeting.

The speaker, geographer Michael Gallagher, formerly worked at Glasgow University, and he travelled north from his new job at Manchester Metropolitan University to give the talk in Helensburgh Tennis Club on Wednesday January 28, and to visit relatives.

“The story of St Peter’s Seminary is about ruin and ruination, but it may become a story about renewal and renovation,” he said.

The adjacent Kilmahew House was a baronial 21-bedroom mansion built in the 1860s. It was occupied by James Burns, then John Burns, and then for many years by the shipowning Allan family who ran the Allan Line.

It was damaged by bombing in World War Two, and after the war the family decided to sell it. The only interested buyer was the Catholic Church, who needed a new seminary to train priests.

In the early 1950s they commissioned Glasgow architects Gillespie, Kidd and Coia to design a small extension integrated with the mansion, but it got bigger and bigger.

The striking-looking seminary opened in 1966 and was actually finished two years later. It has been called a masterpiece of architecture and was awarded the prestigious RIBA gold medal and given Grade A listed status.

“It was an unusual, enormously innovative and influential design,” Dr Gallagher said. “Some things about it they got right — but the sound and damp proofing was not good.”

Buckets had to be placed strategically to catch the drips, particularly in the area around the chapel.

He remembered Father Dougan of nearby St Mahew’s Chapel recalling that a wooden beam cracked suddenly during a service, and commenting: “The mass continued, but with a certain element of speed!”

The flat roof areas remained the problem with the extension and continued to leak and require expensive repairs.

About 1980 the priests left. It had been built for 104 students, but it was never more than half full.

“Time had moved on,” Dr Gallagher said. “Funds were not as readily available to the church, and the number of volunteers to join the priesthood was reducing.”

For four years it was used as a drug and rehabilitation centre, but after that it was left to the vandals and the thieves, deteriorating to a very poor state.

In 1995 Kilmahew House itself was demolished after being badly damaged in a fire started by vandals.

But now there is a new future for the seminary building and the extensive Kilmahew grounds.

The Catholic Church has given the seminary to artist Angus Farquhar, who is planning to create a new arts venue and then preserve the rest of the site as a ruin that can be safely visited.

The Glasgow arts organisation NVA has been clearing and improving the grounds and pathways since 2012, with the full co-operation and help from local people.

They have been growing vegetables in the former vegetable garden, and have opened up several walks.

Dr Gallagher said: “The vision is to have ‘The Invisible College’ — a college without walls for teaching and learning.

“They want to find a way to stop it falling down completely, but to retain it as a ruin and rehabilitate it, reviving the landscape and making it a bit more accessible.”

The next stage of the project is to remove the asbestos from the building, and fundraising for this has already started.

International news organisation CNN has named the seminary as one of the most exciting renovation building projects of 2015.