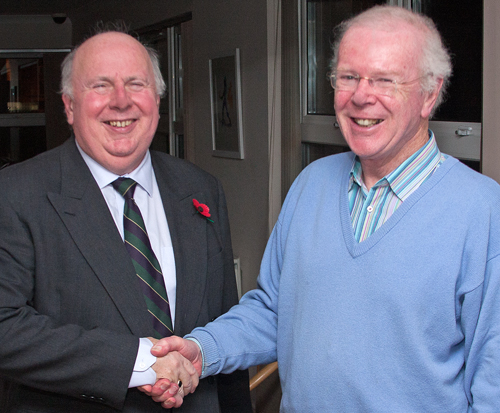 THE STORY of the local regiment, the 9th Battalion of the Argyll and Sutherland Highlanders, in the First World War, was told to members of Helensburgh Heritage Trust on Wednesday evening.

The guest speaker in the second of the winter series of open meetings at Helensburgh Tennis Club was Robert Leyden, chief executive of the Argylls Regimental Trust and the man in charge of the regimental museum at Stirling Castle. He was introduced by chairman Stewart Noble.

Mr Leyden said that the 9th (Dunbartonshire) Battalion Princess Louise's Argyll and Sutherland Highlanders came into being in 1908, when pre-existing Volunteer units were reformed into the new Territorial Force. A Company came from Helensburgh and C Company from Dumbarton.

The following year Princess Louise, daughter of Queen Victoria,  who lived for many years in Rosneath Castle, presented colours to the Battalion, and she continued to take a great interest in the regiment.

World War One started in the summer of 1914, and on October 29 A Company travelled from Helensburgh to train in Bedford. Nearly 100 burgh men had signed up to serve overseas.

With the help of cuttings from the Helensburgh and Gareloch Times and the book ‘With the Ninth Argylls in France and Flanders’, published in Helensburgh by Macneur and Bryden, Mr Leyden told the often harrowing story of what happened once the Battalion went to France in 1915.

There were many fatalities and men wounded or gassed in the trench warfare. Eventually so few were left that they became a reinforcing unit for the 8th Argylls, and in July 1917 the 9th was finally broken up.