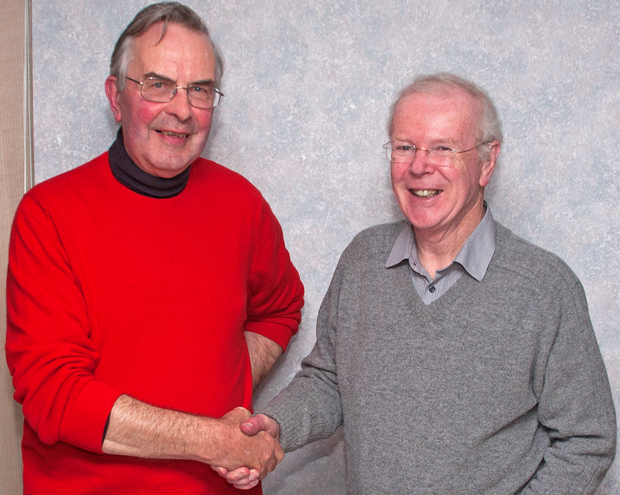 THE evolution of techniques to reduce the noise made by submarines and surface vessels was described to Helensburgh Heritage Trust members and guests at the second open meeting of the winter season on Wednesday October 30 2013.

Speaker David W.Norman, who had previously spoken to the Trust about the Admiralty Hydro Ballistic Research Establishment in Glen Fruin, travelled again from his Dorset home to the meeting room at Helensburgh Tennis Club to talk about noise reduction research in peaceful Loch Goil.

David first came to Scotland when his father took up the post of Superintendent at Glen Fruin, and is a former pupil of Larchfield (now Lomond) School and Hermitage School.

He graduated from Glasgow University with a degree in aero engineering and spent most of his career in the Ministry of Defence, including recurring interactions with Glen Fruin until its closure.

In a talk entitled ‘Loch Goil — noises off’ he made use of stories and pictures from his late father, a photography enthusiast. He defined noise as unwanted sound, and said that this was a big problem in water.

From after World War One submarines could be detected by listening, and some of the original work on this was done at Shandon. Then echo detection work was moved to the Isle of Portland, off Weymouth in Dorset.

In the 1930s a new research body was set up at Teddington, headed by his father, and the study of oceanography became ever more important.

In 1938 Royal Navy submarines had no noise reduction, but the Germans were already working hard on the problem, holding trials and building their own equipment.

Loch Long was chosen in 1941 for British trials but was found to be too busy and noisy even at night, so the following year the remote but accessible Loch Goil was taken over by the Admiralty and an old post office was turned into a lab.

Research was assisted by studying captured German submarines, and a hydrophone was used to listen to the underwater noise vessels made.

Basically the same technique is used today 70 years later, and Loch Goil remains one of several ranges where noise is checked.

The problem was solved by design changes, including flexible rubber mountings for equipment and inserting rubber pipes into metal pipes. Other problems solved have been propeller noise, and the noise made by the flow of water.

In 1946 a submarine named HMS Astute had its noise suppression checked at Loch Goil, and in 2010 the same thing was done in the same place for the nuclear submarine HMS Astute.

The vote of thanks was proposed by Trust president Stewart Noble.