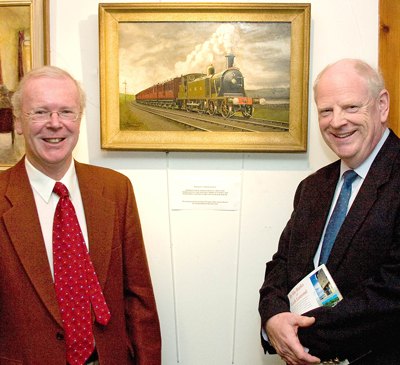 THE train which arrived at Helensburgh Library in West King Street in May 2008 was a very special train which last arrived in the town round about 1890.

It is a painting by artist, writer and railway enthusiast extraordinary C.Hamilton Ellis, and it shows a train bound for Helensburgh at a point just to the west of Cardross.

It was brought north for Helensburgh Heritage Trust’s month-long exhibition to mark the 150th anniversary of the opening of the Glasgow, Dumbarton and Helensburgh Railway, which was open to the public free of charge throughout May.

The proud owner is Andrew Dow from Newton-on-Ouse, York, ex-director of the Railway Museum at York, who opened the exhibition at a private view.

He is a director of Fastline Films Ltd. and the Gresley Society Trust Ltd., president of the Stephenson Locomotive Society, vice-president of the Great Central Railway Society and the British Overseas Historical Trust, a trustee of the Darlington Railway Museum, and the compiler of Dow's Dictionary of Railway Quotations.

“The artist gave the painting to my father,” Mr Dow said, “and it is lovely that it was on show in the burgh for a month.”