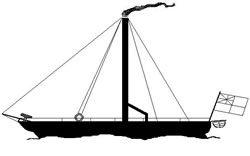 A Religious Heritage Exhibition set up by Helensburgh Heritage Trust is on show in the main hall of the Helensburgh and Lomond Civic Centre in East Clyde Street.

It was organised by Trust director Nigel Allan and will be on display until March.

Nigel said: "In the western world our heritage and society are based on Judaeo-Christian traditions and values.

“This new exhibition traces the journey of Christianity in the Helensburgh area from Celtic times as evidenced by St. Mahew's Chapel in Cardross and the remains of St. Michael's Chapel in Faslane.

“The journey continues through the medieval period to the Reformation with artefacts displayed from the parishes of Cardross and Rhu and the later development into what is now the parish church of Helensburgh with its pedigree shown on a displayed roll.”

The historical background to other denominations in the town — Episcopalian, Roman Catholic, United Reformed and Baptist — are featured, as well as the current work of all traditions to the Christian message in their different activities and outreach.

In the spring there will be an exhibition on Scouting organised by former Trust director Sandy Kerr.