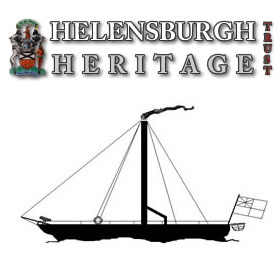 •    Education of the public,
•    Preservation, restoration and enhancement of objects of local interest,
•    Promoting a wider appreciation of the heritage and history of the area.

Our founding documents include a wide range of means by which these objectives may be pursued.

If you care about the future of the area, want to know more about how it came to be as it is, would like to assist in looking after its heritage, or contribute to thinking about how to ensure that local people understand the significance of their heritage, then this is the society for you.

There is an annual lecture series, usually on the last Wednesday of the month during September, October, November, January, February and March. This is held in Argyll and Bute Council's Helensburgh and Lomond Civic Centre on East Clyde Street and non-members are most welcome.

The Board of Directors tries to have at least one major project at any one time.  In the past, we have renovated the stone that commemorates the battle of Glen Fruin as well as holding exhibitions on Henry Bell, John Logie Baird, Gregor Ian Smith, the religious heritage of Helensburgh, and the 150th anniversary of the arrival of the railway in Helensburgh. TheTrust  also played a major part in marking the bicentenary of Henry Bell's Comet in 2012.

Items rescued include stained glass windows from the former St Bride’s Church. Members give talks and lectures to other organisations in the town and offer guided walks for groups.

Two major publications have been produced.  The first, “Around Helensburgh”, is a set of photographs illustrating the life of the area and the second, “Two Hundred Years of Helensburgh” tells the story of the first two hundred years of the Burgh.

The Trust mounts displays of heritage material in both the Civic Centre and Helensburgh Library in West King Street.

The Trust maintains and regularly updates an extensive website consisting of over 1,600 articles relating to local heritage, contributed downloads, letters, information about Trust activities, relevant website links, and a photo gallery containing over 2,150 images from the past to the present.

Anyone wishing to see artefacts saved, assist in researching aspects of the history of the area, or willing to help in encouraging others to understand their local heritage better should contact us.