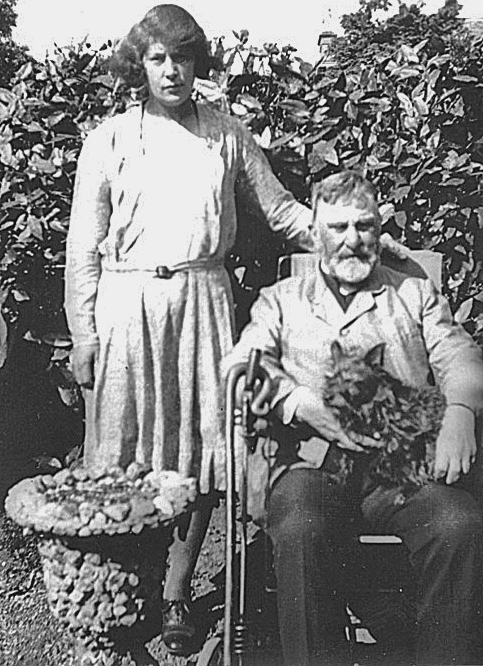 MAY I introduce myself as the son of Helen McPherson Scott, who had a twin brother Ronald Scott, and they were born on December 12 1912 in Glasgow.

They lived in Helensburgh from when they were children and were raised first in south east Helensburgh and later West Princes Street. Helen married Cor Overgaauw from the Netherlands and I am one of their four children.

I was born on February 24 1952 and raised mainly in Holland, but have travelled some times to Scotland to meet members of the family. We stayed with my aunt, Margaret Scott, in West Princes Street.

I have always wondered about my aunt, who was married to a Mr Kerr but they divorced. I never asked my mother or dad about her, and now they are both dead.

I wonder where my family came from, although I believe it may be Glasgow. One particular thing which has stuck in mind is that my grandfather was hit by lightning on a football field south east of Helensburgh.

They lived there and he was at the time gardener at a large estate up on a hill and he worked later as a painter in the docks. He died in 1945, two months after his wife died.

In reply to Pieter Overgaauw’s message I am happy to provide more details about his aunt, Margaret Scott (or Kerr).

My sister Diana tells me that Margaret came from a family of ten children and that her father was a housepainter and they lived at Crowe Road in the Partick area of Glasgow.

Mr Baird died in 1932 and Margaret stayed on at “The Lodge” as housekeeper to Miss Annie Baird, the eldest daughter of John Baird.

In 1935 Annie and Margaret went to help run the household of my father, John Logie Baird, at Sydenham, a south eastern suburb of London.   I had been born in 1935 and one of Margaret’s jobs was to keep an eye on me and make sure I did not stray into my father’s television research laboratory where there were high voltages and other hazards.

With the advent of World War Two, Annie Baird returned to the nursing profession and Margaret looked after “The Lodge” and its temporary population of evacuees.

My father died in 1946 leaving my mother and sister Diana and me in what used to be described as “straitened circumstances”.  Early in 1947 Annie kindly invited us to join her at “The Lodge”, where Margaret Scott came to play a big part in our lives.

She was a very fine person, an example of cliché that talks about “a gruff exterior and a heart of gold” —  and moreover she was a supreme baker and cook. I was on the phone just today with my sister Diana and we agree that her scones were beyond compare.

Margaret Scott had a brother Andrew who kept an umbrella shop near the family flat in Princes Street, just round the corner from the Tower Cinema. Andrew patiently taught me the correct way to fold an umbrella — a lesson I have never forgotten. 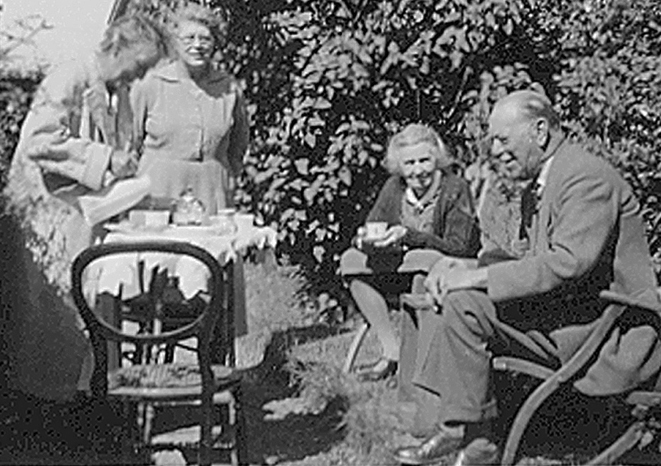 As the years wore on, Margaret Scott’s role with Annie Baird was increasingly that of the carer.  The end came in June 1971 when Annie died at the age of 88. Margaret Scott was found a small flat in East Princes Street and lived on until 1983.

Thinking back over the years I have come to the conclusion that Margaret Scott was a kind of earthly saint — the Baird family owed her an enormous debt — but as so often in such cases we tended to take her for granted.

The top picture shown, taken in about 1930, is of Margaret with the Rev John Baird who at this time was in his late 80s. The small dog in the picture was called “Jinkie”.

The group picture, taken by me in the summer of 1957, shows Margaret presiding over Sunday afternoon tea in the garden. Aunt Annie is seated next to our cousin Arnold Snodgrass. The lady on the left is Louisa Irvine (nee McGregor), an old school friend of Aunt Annie from their days at the now defunct Ministers’ Daughters’ College in Edinburgh.