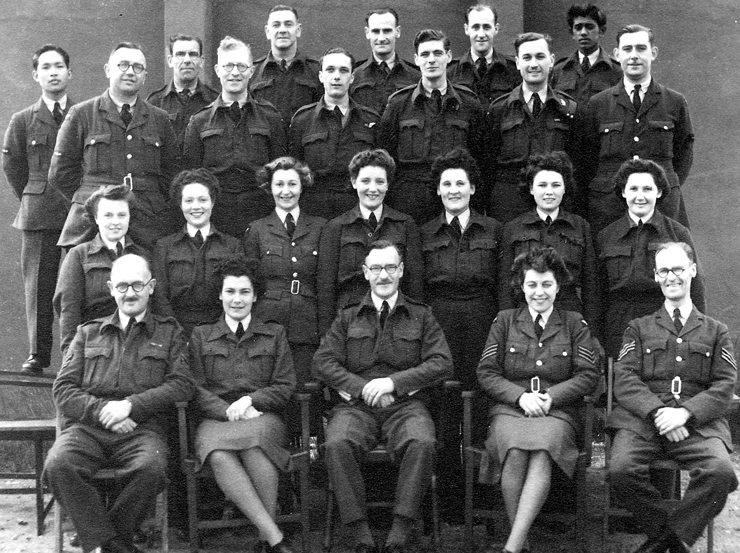 HOW could more than 300 men and women simply disappear from Helensburgh after working in the district during World War Two?

That is the question retired Merseyside newspaper editor Robin Bird is left asking after researching in depth the history of the Marine Aircraft Experimental Establishment between 1939 and 1945.

He still believes that more information must be available in the town and district.

Robin’s thirst for knowledge about MAEE — officially known as RAF Helensburgh for security reasons — began through looking at wartime photographs of flying boats taken by his late father, Bob Bird.

Bob photographed top secret trials of flying boats, seaplanes and anti-submarine weapons at Helensburgh for MAEE and the Ministry of Aircraft Production.

However after the war he did not talk much about what happened at Helensburgh, although he remembered it as a good posting.

Bob, in his wartime diary, hinted at what went on and mentioned a few names such as Vincent Drake, who was in charge of the marine experimental section.

Bob regularly flew with Vincent and had tea with the Drake family at their house in Helensburgh.

In 1943, Bob was posted to the Airborne Forces Experimental Establishment in Yorkshire, and despite his friendship with Mr Drake lost contact with him.

Robin said: “The same seems to have happened with most people who served with the MAEE during the war. They were either posted elsewhere, or returned to Felixstowe, where MAEE returned in September 1945.”

Despite it being an RAF station, MAEE had no squadron association, or old comrades groups through which people could keep in touch.

Former personnel returned to civvy street, or homes in the USA, Canada and South Africa, to name a few countries, and seem not to have kept in touch.

“MAEE was a secret wing of the RAF, made up of RAF, WAAF, scientists, professional and trades people,” Robin said.

“Most seem to have been reluctant to talk about what they did post war, probably having been sworn to secrecy.

“Other factors contributing to the post war veil of secrecy  was the complete disappearance of any evidence MAEE had been based at Helensburgh — although it was actually at Rhu.”

At Rhu, Ardenvohr was requisitioned from the then Royal Northern Yacht Club by the MAEE for its officers. Rosslea, next door, was headquarters.

Various houses were also requisitioned, including Ardenconnel for sergeants and Shorelands for WAAFs. Civilian staff stayed in hotels, lodgings and rented houses in Helensburgh.

Bob, for example, had rooms in a house in William Street, and cycled to Rosslea. However, these wartime guests do not seem to have kept contact with their hosts after the war.

Robin said: “When I stayed on a visit last year at Floral Cottage in Rhu, I noticed a recent guest had been 'J E Allen', a professor now in his 90s, who had made a return trip to the banks of the Gareloch.

“As a boffin with the MAEE, he wrote several detailed reports on flying boat design, helped by a younger scientist, James Hamilton.

“Hamilton, who was knighted later in life for designing the wings of Concorde, died earlier this year, a timely reminder that memories of MAEE at Helensburgh must be recorded so future generations know the important work that was carried out here.

“Without doubt, the flying boat and seaplane research helped defeat the U-Boats which threatened to defeat Britain between 1940 and 1943.”

Time has not helped Robin’s research. MAEE left Scotland some 67 years ago and time has taken its toll on lives and memories.

However he has managed to speak to dozens of former MAEE personnel, who are now in their 80s and 90s, and he has amassed has a wealth of first-hand accounts.

He has also researched the lives of others posthumously to come up with some incredible stories.

In 1940, for example, some Norwegian pilots were based at Helensburgh having brought Heinkel 115 flying boats with them when they escaped Norway, a story told elsewhere on this website.

The sight of the distinctive Heinkel aircraft arriving in the Gareloch caused something of a stir, not surprisingly as they were German warplanes.

Then there was the MAD scientist from America based at Helensburgh for trials of the most secret MAD device — the magnetic aircraft detector, or MAD.

One of the Commanding Officers was Group Captain Sidney N.Webster, who won the Schneider Trophy seaplane race in Venice in 1927, and in all RAF Helensburgh consisted of approximately 375 people.

Robin said: “Ideally, each of these would have a story they could have told. Fortunately I now have dozens of such stories and every one is a gem!”

Robin, whose second book about the establishment is close to completion, still hopes to hear a few more gems.