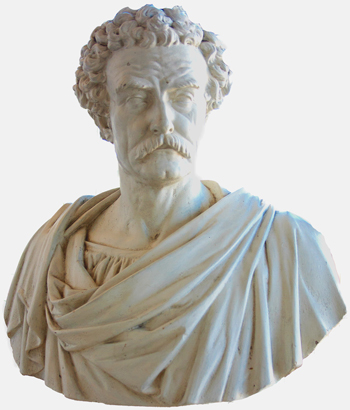 HELENSBURGH Heritage Trust was delighted to fulfil a sixteen-year dream on May 1 with the opening of its Heritage Room in Helensburgh Library in West King Street.

But, although a number of experts on local history were present at the opening reception — the last function presided over by Provost Billy Petrie before his well-earned retirement after 45 years in local government — none could solve a mystery.

Two busts are on display, with one of them instantly recognisable as the burgh’s first Provost, Henry Bell. But no-one knows who the other one is.

Trust honorary member and former reference librarian Mike Davis, who took early retirement last year, made the humorous suggestion that it is Tom Selleck of Magnum fame curiously dressed in a toga.

It certainly looks like the actor, but probably is not!

Mike said: “It came from under a table in the old Rhu Parish Hall along with the bust of Henry Bell and one of Billy Petrie, who had let me know they were all there and suggested I take them to the library.”

Any help in identifying the gentleman would be much appreciated, and you can see him for yourself by visiting the Heritage Room — which is open whenever the library is.