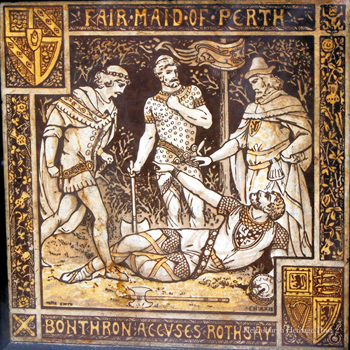 A FASCINATING piece of literary history was uncovered during renovations at a popular Helensburgh hostelry, the Ashton in West Princes Street, in December 2011.

The removal of panelling in the front of the public house to open up the windows revealed a set of ten sepia-toned ceramic tiles, each featuring characters from the Waverley Novels by Sir Walter Scott.

Publican Euan Catterson, who took over the pub from his father Gerry, said: “Not even my father had any idea they were there.

"The joiner spotted the corner of one of the tiles when he began knocking the panelling through and, when we investigated closer, we found there were five on each side.

“I have no idea how long they have been there, but we think they must have been decorating the backs of seat frames.

“A couple were damaged by work in the past because people obviously didn’t know they were there and, in one case, there was only a fraction of the tile left. 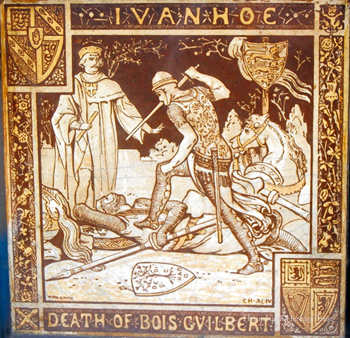 “However, investigation among the rubble revealed all the missing pieces and we were able to put it back together.

“They are now very much a feature of the refurbished pub and have attracted a lot of attention.”

Euan’s father Gerry came back to Helensburgh from his new home in France for the re-opening, which fell on his birthday, and he was as surprised as everyone by the tiles.

The high front and narrow windows of the pub had hidden them from sight for years, even before Gerry took it over in 1955.

The earthenware tiles appear to be from a set of twelve depicting scenes from the Waverley Novels, and were introduced at the Paris Exhibition of 1878. They were produced as both six and eight inch tiles.

The designer was John Moyr Smith (1839-1912), a British printmaker and designer, who had been a pupil of Christopher Dresser and was Minton’s leading pictorial designer in the 1860s and 70s. They were produced at the Stoke-on-Trent factory of Minton’s China Works.

The Sir Walter Scott tiles were available in different combinations of four colours and today sell at auction for around £100 each. 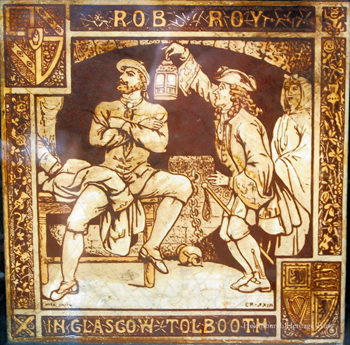 On each tile, the book title appears at the top, the scene and chapter number bottom right, and the designer’s name bottom left.

Minton's China Works was one of some 55,000 exhibitors at the Paris Exhibition which had some 16 million visitors.

The factory was set up between 1793 and 96 by Thomas Minton, taken over by Herbert Minton in 1836 until the latter’s death in 1858, when the china business was carried on by Colin Minton Campbell, in partnership with Michael Daintry Hollins, who ran the tile business.

In 1868 the partnership ended and Campbell continued as Minton's China Works, also producing tiles, until 1918 when tile production ceased. From 1873, the name 'Minton' was changed to 'Mintons' without the apostrophe. In 1968 the firm became part of the Royal Doulton tableware group.

Scott’s Waverley Novels were written in the early 19th century and dealt with historical adventure, the lives, loves, wheelings and dealings of personalities and events in British and mostly Scottish history.

The unique style caught the public's imagination when they were published in the early nineteenth century, and they were very popular. The Waverley Novels are credited with establishing the form of the historical novel. 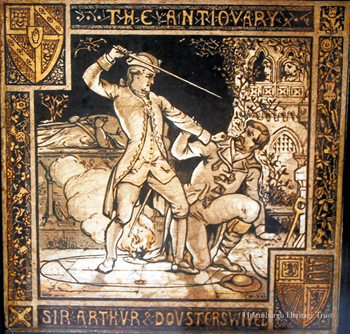 The Scott tiles are amongst the best examples of Moyr Smith's work on tiles, as the detail, engraving and print quality is outstanding. The design fills the tile, twice as much for the money compared to some circular designs.

Sir Walter was very familiar with Garelochside and the Rosneath Peninsula, which provided the setting for much of his novel ‘Heart of Midlothian”.

Euan Catterson added: “The Ashton and the nearby Teak and Ash were the only pubs in Helensburgh that had such narrow front windows, and that was because of an old bye-law which said that people couldn’t come out of a church and see straight into a public house.

“The bye-law has been dropped now and we have been able to open up the front of the pub.”

The decor of the pub also features some fascinating old photographs of Helensburgh.