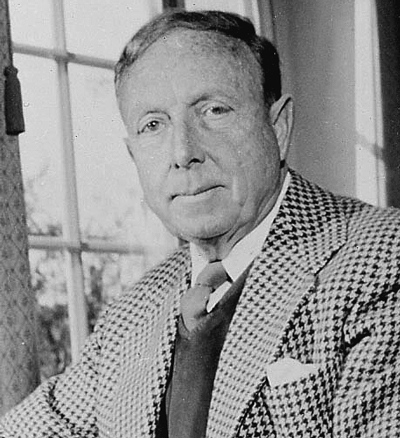 EXACTLY 80 years ago a long novel of extraordinary power, mainly set in a thinly disguised Dumbarton, was being read eagerly not just in Scotland, but across the world.

Its writer was a Cardross-born doctor who lived for a time in Helensburgh and was also a fervent supporter of Dumbarton Football Club. Now, suddenly, he was a celebrated author and he would write another 24 books.

Many of them sold well, yet not one of them achieved the explosive success of the first.

Archibald Joseph Cronin was born in a cottage in Cardross in 1896. His father was Catholic, his mother Protestant; I mention this because sectarian prejudice is one of the many controversial themes in his first novel, which was called Hatter's Castle.

Cronin wrote it in just three months as he recovered from an ulcer, in a rented farm near Inverary. He sent it to the well-known Socialist publisher in London, Victor Gollancz, who took a risk and published it early in 1931.

How that risk paid off. The novel was praised by one of the literary giants of the time, Sir Hugh Walpole, as the finest novel since the war, and it sold phenomenally.

By the end of 1931, Cronin was already a very wealthy man. In time, he would emigrate to Switzerland: this was one of several parallels in his life with that of Alistair MacLean, the Glasgow schoolteacher who also achieved extraordinary success with his first novel, HMS Ulysses.

Hatter's Castle is strong meat. Some literary historians have disparaged it, or simply ignored it, because it is melodramatic. But it is a credible assault on capitalism, as well as a relentless critique of the sheer nastiness of much Scottish life in the late Victorian era.

The hatter of the title is a man called Brodie, an odious small town brute. When he discovers, one stormy, terrible night, that his young daughter is heavily pregnant, he kicks her quite literally out of his house, the castle of the title.

Cronin describes Brodie's grotesque fury with relish. He later defended himself by saying that he had known fathers who were stern to the point of tyranny, and had broken their children. He was using fiction to tell unpalatable truths about the condition of Scotland.

Cronin was a master of melodrama; he indulges in several over-the-top set pieces. The man who made Brodie's daughter pregnant, a happy-go-lucky Irishman called Foyle, had to be killed off, for the convenience of the plot. So what did Cronin do? He put Foyle on a train bound for Dundee.

What follows is Cronin's version of the Tay Bridge disaster, though he was a doctor, not an engineer, and as the railway historian L.T.C.Rolt fastidiously pointed out, steel girders — they were iron girders anyway — don't snap like twigs.

But the real controversy lay in Cronin's propensity for muscular, bludgeoning scenes which were too much for genteel tastes. He describes Brodie's fall, the inevitable fall of a vicious domestic and business tyrant, with graphic, almost gothic, gusto.

Brodie seeks to destroy his son as well as his daughter, and hits the bottle really hard. The man is so one-dimensional that there can be no sympathy for him.

Hatter's Castle was made into a film in 1941 with a stellar cast — Helensburgh's Deborah Kerr, James Mason, Robert Newton, Emlyn Williams — and there was a successful serialised dramatisation on Radio Scotland in the late 1970s.

But now Cronin is best known as the inventor of Doctor Finlay, an idealised country doctor whose casebook contained little of the brutal melodrama
of Hatter's Castle.

Yet Hatter's Castle, Cronin's masterpiece, is now largely ignored by the reading public. Despite its flaws, it is an intelligent and immensely readable novel, and I think it deserves rediscovery.