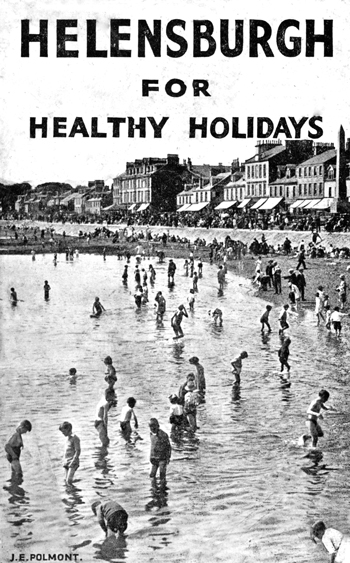 HELENSBURGH seafront was at the peak of its popularity in the 1920s and 30s.

The sun brought out the day trippers, and the beach and esplanade were full of people enjoying themselves, as this old London and North Eastern Railway brochure cover clearly shows.

The slogan was ‘Helensburgh for Healthy Holidays’ — although raw sewage used to be piped directly into the Firth in those days!

This is how the brochure describes the burgh . . .

Helensburgh, beautifully situated on the Clyde at the mouth of the Gareloch, is a modern and model town.

With its balmy air, gentle sea and mountain breezes, and generous share of sunlight, Helensburgh in one of the ‘lungs’ of the West of Scotland and it has well earned the title ‘Healthy Helensburgh’.

The town is laid out on the garden city idea with wide parallelograms and spacious squares, and on a plan which admits of the fullest scope for urban beauty.

It is stated that there is no other resort on Clydeside where there are so many trees as in Helensburgh.

The streets are, for the most part, plentifully planted with trees, and except in the business thoroughfares, the houses are chiefly of the mansion house and villa order, with tasteful gardens.

In spring and summer, flowers and foliage abound everywhere, and at such seasons a walk through the town affords great pleasure.

At the same time its seafront has been well utilised for the benefit of the holidaymaker.

In fact the fascination of Helensburgh is that all tastes are catered for in the matter of sports and relaxation, while it offers a genial environment for those living in the sunset of life and for the businessman who can afford to live away from the hurly-burly of the city.

There are the pleasures of the seaside in abundance, and there are also the quiet highways and byways for those who do not care for strenuous amusement.

The name of the town was given out of compliment to Lady Helen, the wife of Sir James Colquhoun, eighth baronet of Colquhoun and Luss, the owner of the ground on which it is built.

A spacious esplanade, from which a well-appointed pier protrudes, runs along the seafront. From this pier a fleet of steamers connect with all the favourite routes.

One of the features of Helensburgh is its abundance of open-air amusements.

There are four public parks, with playgrounds for children and adults, and two wide promenades. There are, too, other places of entertainment in which all classes of visitors will find their requirements amply provided for.

The roads are well adapted for motoring and cycling, while pedestrians have a choice of moor and mountain paths and some very pretty glens.

Numerous cheap and popular sea and loch excursions take place. Prominent among these is the short but charming sail up the Gareloch, a gem of a loch, dominated by craggy peaks and hemmed by lesser heights, and rich in literary and other interests.

Helensburgh possesses first class hotels, boarding houses and private apartments, and altogether there is probably no spot on the Clyde Coast better suited to be the headquarters of a summer holiday than this pleasant and sunny town.

It satisfies the demands of all classes. Even if the visitor did nothing all day but sit on the bright esplanade, and watch the life about him, and the panorama moving on the firth, he would have entertainment and health enough.

This year, go to Helensburgh and see for yourself.

The LNER brochure naturally advertised rail and steamer tickets to and from the town, and Sunday steamer cruises from Craigendoran on board the paddle steamers Waverley and Jeanie Deans.