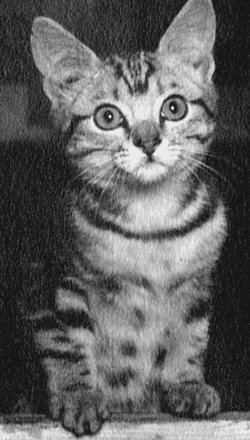 Pyro actually flew for King and Country in World War Two, and his extraordinary exploits have been officially acknowledged.

His story has been told by retired Merseyside newspaper editor Robin Bird, who has written two books about the Marine Aircraft Experimental Establishment at Helensburgh and Rhu during the Second World War. One has been published and the next one will be published soon.

His interest in the top secret RAF Helensburgh base of MAEE is because his late father Bob Bird — a former seaside photographer in Margate — served there as a civilian photographer recording trials of experimental aircraft and weapons, after answering a newspaper advertisement.

Pyro was a stray kitten who made his home in the base and was adopted by Bob. They flew together in flying boats and seaplanes.

The story of the flying cat is included in Robin’s second book, and in November 2011 he received a posthumous award for bravery and devotion from the People's Dispensary for Sick Animals.

The award was presented by Fiona Bruce to Robin and his wife Carla at a recording of the Remembrance Sunday edition of the popular BBC TV programme Antiques Roadshow. Robin said: "Pyro is a pussycat that Helensburgh can be proud of.”

Deryck Wilson of the PDSA said: “Pyro is not eligible for the Dickin Medal, the animals' VC, as he did not see combat, but he has been added to the PDSA roll of honour.

“It is very unusual for a cat to be recognised in this way, but Pyro’s story is unique.” 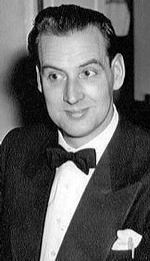 Bob christened the kitten Pyro after the photographic developing fluid pyrocatechol, hence Pyro-the-cat, and a bond developed between the two.

Bob was a young man in his 20’s away from home, and the stray kitten when looking for a home found the photographic darkroom, a dark secure place away from the busy goings-on in an RAF base on a war footing.

Then catastrophe struck. Bob accidentally slammed a glass sliding door on Pyro’s tail not knowing the animal was exploring the contents of the cupboard.

The injury looked bad and Bob took Pyro to the medical officer, who managed to save the tail from amputation.

Bob, probably feeling guilty, devoted as much time as possible to nursing the wound and the bond between the two grew even stronger. But this resulted in Pyro becoming distressed when Bob went flying.

As a Ministry of Aircraft Production employee the photographer had certain freedoms not available to listed RAF personnel or civilian office staff at MAEE Helensburgh.

Robin said: “This allowed him to pop Pyro into his flying jacket and take him aboard a Sunderland flying boat on a maiden flight. Pyro took to flight as a seaplane takes to water.

“My mother told me that Bob would whistle when he was going flying, and Pyro would come running. Cats are very independent creatures, so for one to happily climb aboard the noisy flying boats my father went up in like that is really remarkable.

“Pyro earned his ‘wings’ when he was accepted by pilots and aircrew as one of the team. He was viewed as a lucky mascot that would chase away gremlins, imaginary creatures that RAF types believed responsible for accidents.

“When Pyro was aboard a Sunderland or Catalina, gremlins kept a low profile. Several MAEE pilots and crew died in flying accidents, so anything that made such fatalities less likely was welcomed.

“Gremlins did strike, though, on one Pyro flight. ‘Gremlins’ covered the aircraft in frost 20,000 ft above sea level on a winter’s day during 1942.

"Bob suffered frostbite to fingers on both hands while changing a lens, and the pilot’s eyes were affected by the extreme cold. Despite this, he managed to crash land safely.”

Throughout the ordeal Pyro remained by his master’s side allowing him to warm his frozen fingers on Pyro’s fur and body heat.

After the landing Bob was was taken to hospital for treatment, and the Medical Officer commented that Pyro’s warmth had saved Bob’s fingers from possible amputation.

The young cat flew with Bob throughout the war, moving with him eventually to RAF Beaulieu in Hampshire. But sadly the story does not have a happy ending as he was run over there and killed by an RAF lorry in 1945.

After the war Bob and his wife Lily settled in New Brighton in The Wirral, where he worked as a newspaper photographer. He died in 1999 at the age of 79.

A memorial to Pyro (right) has been set up by Robin in a display case at the Fort Perch Rock World War Two aviation museum, which is in a former defence installation situated at the mouth of Liverpool Bay in New Brighton.

He said: "It contains a lifelike sleeping cat, and is proving popular with children, who assume we had Pyro stuffed! One visitor from Glasgow identified the marking on Pyro's fur, as in the original photograph, as typical of a stray cat found in the area."