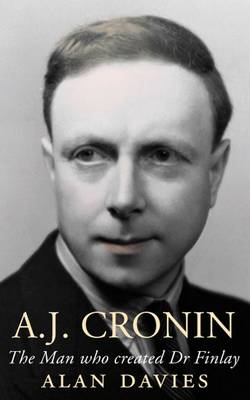 THE new biography of Cardross-born author A.J.Cronin has been exclusively reviewed for this website by Helensburgh Heritage Trust president Malcolm Baird.

To open on a personal note: I came to live in Helensburgh in 1947 after having spent the first 11 years of my life in southern England. It took me some while to adapt to Scotland and its culture.

Aunt Annie Baird and her housekeeper Margaret Scott were kindness itself, but Scotland often seemed like a foreign country to me. I needed to understand what exactly made Scotland tick, and this is where A.J.Cronin’s novels were enormously helpful.

Born in Cardross, raised in Helensburgh and schooled in Dumbarton, Cronin vividly portrayed the basic Scottish life that lay beneath the politenesses of Helensburgh.

In the 1950s that helped me to relate to my fellow-students at Glasgow University, many of whom were ambitious escapees from the working class who might have stepped straight off the pages of a Cronin novel.

Alan Davies’s biography is a good read although parts of it are so thorough as to be thesis-like.

For example he examines in forensic detail the cliché that Cronin, a Catholic, suffered from sectarianism as he grew up. After much analysis, Davies concludes that Cronin’s semi-autobiographical novels exaggerated this aspect.

Much space is also given to Cronin’s fluctuating relationship with his left-wing publisher Victor Gollancz, as revealed in letters between the two men.

This was in the glory days of novel writing when good books could command six-figure sales and the film industry was eager to adapt them for the screen. After the appearance of Hatter’s Castle in 1931, Cronin became the equivalent of a multi-millionaire in today’s terms.

The success story continued until about 1960 by which time Cronin’s books were beginning to lose their appeal; then, rescue came in the form of BBC television’s enormously popular series Dr.Finlay’s Casebook, based loosely on Cronin’s work.

Behind Cronin’s success there lay a dark truth; his wife May, with whom he had three children, had mental problems that gradually worsened to the point that she ended her days in a psychiatric hospital in Montreal. This is all spelled out in painful detail by Alan Davies.

Cronin himself died in Switzerland in 1981 at the age of 84. The medical journal, The Lancet, noted his death in a curt two-line announcement; it was obvious that  the memories of Cronin’s harsh fictional portrayal of some of his fellow-doctors were still fresh.

It is also sad that no public memorial to Cronin exists in Cardross or Helensburgh or Dumbarton where he spent his formative years.

Recently he may seem to have been fading into oblivion, but Alan Davies’s well-researched book helps to bring Cronin back into focus.

It is an open question whether the Scots people have changed all that much since Cronin wrote. I personally think not, although the country itself has changed profoundly.