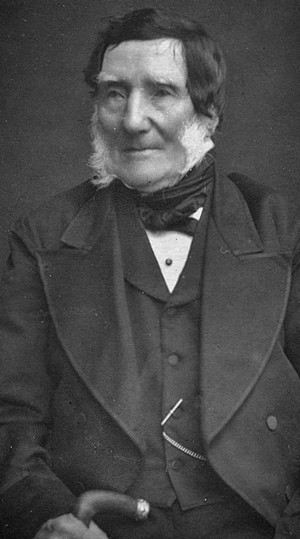 ONE of the most fascinating books about Helensburgh’s past is ‘A Nonogenarian's Reminiscences of Garelochside and Helensburgh’.

It was written by a burgh tailor, Donald MacLeod, and published by Macneur & Bryden Ltd. of East Princes Street in 1883.

The youngest of a family of ten sons and one daughter, he started a tailoring business at the corner of East Clyde Street and Maitland Street, with one window of the shop on each street.

He ran the business until his death, and after that it was carried on by his grandson Charles.

Donald (pictured below left) was a prolific author, whose other works included the ‘History of the Castle and Town of Dumbarton’, ‘Guide to the Lake District of Scotland’, ‘Dumbarton, Vale of Leven and Loch Lomond’, ‘Past Worthies of the Lennox’, and ‘Historic Families and Notable People of the Lennox’.

His enthusiasm for local history was fired by stories of the past he heard from his uncle Gabriel (pictured top right), who was born in the 1790s in Aberdeen where his father’s regiment, the Argyllshire Fencibles, were camped.

Gabriel was taken back to Rosneath by his mother, who was widowed soon after, and she brought him up.

His first schooling was at The Clachan, Rosneath, but he went to school in Helensburgh in 1802 and spent most of his life in the burgh, where he died at the age of 90.

The full title of the book is ‘A Nonogenarian’s Reminiscences of Garelochside and Helensburgh and The People who Dwelt Thereon and Therein’, and it is full of accounts of people and events of the first 80 years of the town and elsewhere in the Parish of Row (now Rhu). 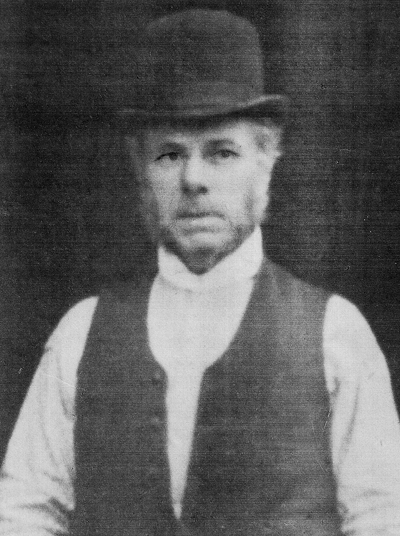 In the introduction Donald writes: “The party referred to in the title is my uncle, Gabriel MacLeod, whose advent and that of Helensburgh on this globe took place within a score of years of each other, the burgh having precedence.

“The venerable old man would, in my presence, and for my special delectation, oft discourse of matters relating to the Garelochside and Helensburgh, covering from the beginning of this century down to date.

“Those callow things as they came from his mouth I captured, took under my wing, and duly feathered in as fair a garb as the wardrobe of my brain could furnish, and now let them loose.”

Featured in the book are the MacAulays of Ardencaple, the Colquhouns of Luss, first Provost and Comet steamship pioneer Henry Bell and his municipal successors, engineer Robert Napier of West Shandon House, and other eminent townsmen and local worthies.

Full details are also given of the heresy case of Row minister the Rev John MacLeod Campbell, and the murder of Row schoolmaster John Arroll.

The book is dedicated to Helensburgh landowner and benefactor William Kidston of Ferniegair, whom he describes as “a true friend of Helensburgh and its people.” 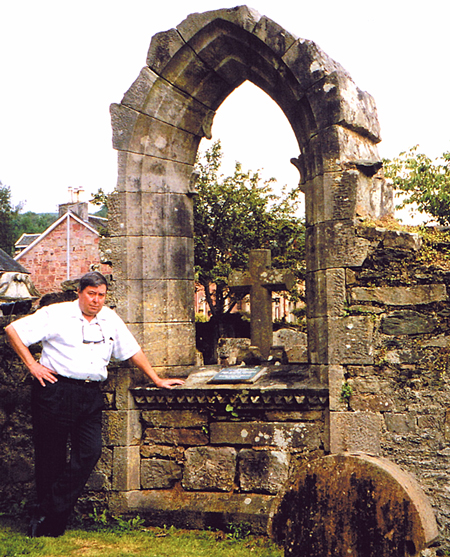 The Heritage Trust website was contacted in February 2011 by an Australian called Peter Macleod (pictured right on a visit to Rhu Churchyard) who had begun preparing a book on his family history — quite unaware that he was descended from an author.

Peter can trace his MacLeod forebears from Rhu and Helensburgh as far back as 1747, and his branch of the family emigrated to Australia in 1921.

Information Peter supplied included references to Gabriel MacLeod and his nephew Donald Malcolm MacLeod — and Donald was the author and Gabriel the nonogenarian whose tales of the past Donald recounted.

When Peter was told this, he replied: “I had no idea Donald was an author. However a reprinted version of the book is available through Amazon USA and I have ordered it!”

Another forebear, Malcolm MacLeod, and his brother-in-law John Oswald were models in Sir James Guthrie’s famous painting ‘A Highland Funeral’,

Considered a masterpiece, it is an Ayrshire scene thought to have been painted at Eastwood, East Clyde Street, and exhibited at the Royal Academy in 1822 when the artist was only 23. Each model was used for several figures.

Other members of the MacLeod family used to exercise Madeleine Smith’s pony at Rowaleyn (now Invergare), Rhu, when the girl who was later accused of poisoning her lover was staying at the family’s main home in Glasgow.