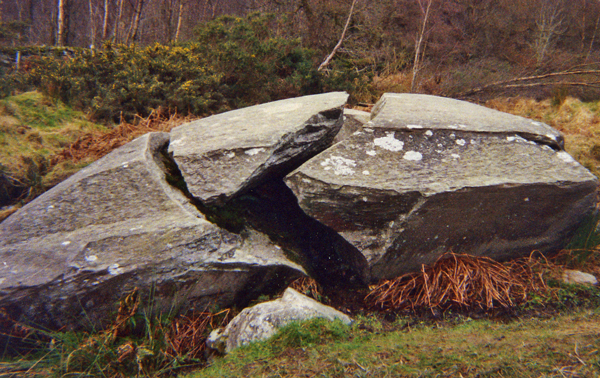 A DAMAGED glacial boulder from 10,000 years ago catches the eye of walkers on the popular Upland Walkway footpath near its junction with the Highlandman’s Road on the hillside above Helensburgh and Rhu.

But as more and more walkers use the footpath, concern is growing about the need to preserve the relic of the past.

Helensburgh Heritage Trust chairman Stewart Noble wrote in the Trust book ‘200 Years of Helensburgh’ that as ice age glaciers melted they left large boulders lying on top of the soil, and this is one of them.

He says that the first evidence of people in the area is some 6,000 years ago, with signs of primitive farming, and they were intrigued by the boulder and spent a considerable amount of time gouging out cup markings on it.

“These date back to about 2,500 to 1,500 BC, from the end of the Stone Age to the start of the Bronze Age,” he writes. “The experts do not know why prehistoric man spent so long on this activity — perhaps there was some religious meaning.”

Local historian Alistair McIntyre, a director of the Heritage Trust, says that many theories have been put forward about the purpose of the rock art, including spiritual and ritual use, a way of proclaiming territory and ownership, and a system of non-verbal communication.

A leading authority on the subject, Ronald W.B.Morris, has noted that in Argyll certain patterns can be identified as the stones are usually found in a place with an open view, almost always to the south and usually within sight of the sea or an estuary — just as the Helensburgh stone is.

Another expert, Derek Alexander, said of such stones in Renfrewshire that they tended to be located at the boundary of farmed and upland areas, perhaps reflecting where the wild and untamed meets the controlled and man-made.

Alistair said: “Lying at an altitude of 450 feet, and in a relatively exposed location, the Helensburgh boulder could well come into this category and could be viewed in a similar light to the carved stones above Shandon, which are higher up the hillside, but again are glacial deposits.

“From a heritage point of view, possibly the most significant aspect of the boulder is that it demonstrates, beyond any doubt, the presence of a people with deep roots in the area.

“With up to 57 separate carvings, this is no Stone Age equivalent of the roving ‘Kilroy was here’ type of message, but is mute witness to a deep and long term commitment to the land.”

The first person to make a proper scientific study of it was the distinguished West of Scotland-born archaeologist, A.D.Lacaille, who examined the 50 feet wide rock in 1923 and also did a considerable amount of work in the Luss area.

He noted that the cup markings were well preserved because of the hardness of the rock, but did not mention ring markings that are sometimes associated with cups.

Alistair said: “Anyone who examines the boulder today may be saddened by what appears to be a wilful act of destruction, the tell-tale signs of a deep boring made for the placing of an explosive charge. The consequence is all too clear, with the boulder having been shattered into four pieces.

“This act had been carried out at some date prior to Lacaille's study, and he comments that the purpose had most likely been to procure stone for building purposes, but that the result had been such as to disappoint the perpetrator. Even so, the stone is now a ruin of its former self.”

Lacaille also mentioned a deep date mark of 1732. Alistair thinks this may have been inscribed by the well-known Edinburgh landscape architect and surveyor, William Boutcher, who the following year produced a map for the then landowner, Sir John Schaw, in which he envisaged a grand scheme of estate landscaping.

A second date, 1924, has been carved close to the earlier one. Alistair says that Lacaille had produced his report the year before, and most likely had carried out his actual fieldwork earlier still, so can probably be ruled out.

He said: “On the other hand, the attendant publicity may well have had an effect. The results of Lacaille's work were reported in the Press, including the pages of the Helensburgh and Gareloch Times.

“The interested and the curious would almost certainly have been drawn to the spot to see the evidence. One can well imagine someone arriving in the wake of the publicity, and taking time to record the date.

“A third date, 1957, has also been carved in proximity to the other two, but no significance in the timing has as yet been identified. Nevertheless, the boulder is mute witness to yet another story.”

In a poem called ‘Jock Bateson’, composed by John Butt MacLachlan, a former Town Clerk of Helensburgh, Jock is crossing the moor from Glen Fruin to Helensburgh in the gathering dusk of a summer's evening.

He is carrying a keg of illicitly-distilled whisky, and just as he comes within sight of the town, he stumbles across a gathering of the ‘wee folk’.

Jock hides behind a large boulder, which from various clues in the poem is virtually certain to be this one.

Inevitably, he is discovered, and is browbeaten into handing over his precious keg, which is immediately broached. He awakens next morning with a splitting headache and an empty keg.

“So the boulder has a claim to literary, as well as historical, fame,” Alistair said.

He is worried that damage from the modern day boots of walkers clambering on to the rock is inflicting severe wear and tear on the cup marks which are no longer as well preserved as in Lacaille’s day.

He asks: “Can anything be done to protect this ancient and tangible reminder of our heritage?”