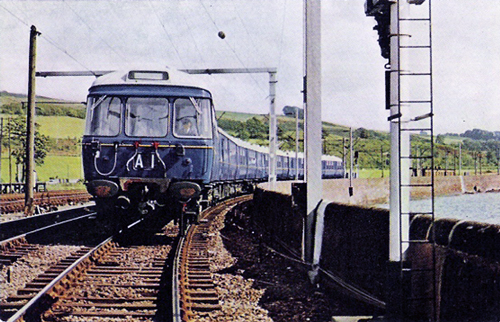 A NEW exhibition entitled 'Glasgow Electric at 50: 1960–2010' opened on Friday November 5 at the city's Kelvingrove Art Gallery and Museum.

In 1960 the iconic and much-loved 'Blue Train' was introduced as the first electric commuter train serving Helensburgh.

The exhibition celebrates the trains, people and the transformation of the line between Airdrie and Helensburgh, Balloch and Milngavie with 50 years of suburban electrification.

It also links to December's opening of an eastern extension of the line to Bathgate in West Lothian, and will be open until February 7 next year.

Passengers flocked to the new trains in 1960, with numbers trebling within weeks, and Martin Brough, one of the organisers of the exhibition, said the trains utterly changed rail travel.

He said: "Before they arrived, travelling by rail through Glasgow was very dirty and slow. There were a lot of tunnels and very little ventilation. People had to put paper bags over their hands to open the doors because the trains were so filthy.

"The electric trains were clean, fast and reliable, and the windows at the front and back meant you could see where you were going and behind you. They were a tremendous success, and next month's new line opening shows electrification continues to be a success story."

The electrified services were known as the Blue Trains because of their light blue livery, taken from the former Caledonian Railway, which set them apart from British Rail's then maroon scheme. They were built at Linwood in the factory that later made the Hillman Imp cars.