A RAILWAYMAN was the inspiration behind two clubs for Helensburgh artists.

Charlie Taylor, who lived in the Claverton flats at 101 East Princes Street with his wife May (nee Thomson), was a keen and very good amateur painter, and he relished working with other local artists.

John Carslaw, a trustee of the Anderson Trust art collection and noted artist himself, recalled that Charlie started a small local group called the Ardencaple Painters.

John's mother, Evelyn Carslaw, one of the well-known Glasgow Girls group of artists, was one of the Ardencaple group which grew and, before long, was joined by his great friend Gregor Ian Smith.

The same trio were also involved in the founding of Helensburgh and District Art Club, and Charlie was the first president, serving for three years before handing over to Gregor Ian.

Another founder member, the late Muriel Borland, recalled: “Charlie was a really nice person. When I first knew him he was a railway guard, and I can remember him jumping on to the stream train with his flag.

“The Art Club began in 1951 when about a dozen local artists held a meeting in a tearoom in Clyde Street. Charlie was there of course, and I can also remember Gregor Ian and Allan M.Fraser, and we decided to form the club.”

The club formally began from September 25 1951, and a Mr R.M.Bell made available a studio at 22 Colquhoun Square.

Its aims were to provide members with a place to meet and work, to organise an annual exhibition when works could be sold, and to promote interest in and appreciation of art by townsfolk.

The first exhibition was held the following August in St Andrew’s (now West Kirk) Church Hall and lasted 14 days. At the opening ceremony, Charlie welcomed a large attendance and said that from small beginnings the club had developed steadily.

He reported that Mr Bell’s premises were no longer available, but the minister of Park Church had come to the rescue with the offer of use of the church halls.

However they would not be available in winter, so he appealed for information about suitable premises — an unused garage or outhouse, or a piece or ground where a hut the club had been offered might be erected.

He then invited the club’s honorary president, Miss Nance Anderson, to open the show. An art critic noted in the Helensburgh and Gareloch Times: “Charles Taylor’s work is characterised by a brilliance of colour almost poster-like in effect, yet his outlines are never harsh. He handles trees most effectively.

“‘Loch Lomond from Tarbet’ had fine perspective, the ‘Firth of Clyde’ lively colour, in ‘Luss Water’ reflections were very well managed. ‘River in Skye’ had a lovely luminous quality, and ‘Bridge of  Orchy’ also that range and depth of colour that is almost unbelievable till one sees it in the Highlands for oneself.”

Mary Latimer, who owns two of Charlie’s paintings, said: “I have had them for many years and they have been greatly admired by many people. One is a scene painted at Cairndow on Loch Fyne, and the other is a large vase of pansies.

“I remember going to his flat to look at his paintings with a view to buying one, and I came away with two! All four walls in the room were packed with his work, so I think that there must be quite a lot out there in the Helensburgh area today.”

Her late husband Stan, a former railway executive and local councillor, also knew Charlie, and said that he became a platform foreman or inspector. well and thinks that he was a signalman at one time.

Mr Brown said: “I regularly visited Charlie and his wife at their home in East Princes Street. I often admired his paintings, and I purchased from him an oil painting of Loch Lomond, painted from where the Cruin Restaurant is now.

“He told me that he always included animals in his landscape painting as they added life to the picture.

“When we met we talked about his work and the enjoyment that his painting brought him.  I think that he originally came from Lanarkshire and was moved to Helensburgh by the railway company.

“When I conducted his funeral service, I spoke of him being 'the man who painted sheep' — adding colour and life into the lives of those whose homes contained one or more of his paintings.”

Charlie died in the town’s Victoria Infirmary on September 10 1979, during that year’s Art Show in the Victoria Hall. He was survived by his wife, but they had no children.

The late Jenny Sanders, a Heritage Trust director, remembered that time, and owned Charlie’s still life oil painting entitled 'Lilac and grapes on table', which she bought at that show.

Kitty Bell, from Broadley in Buckie, said: “I have been trying to track down a painting, print or photograph of any of Charlie's paintings. He was a great watercolourist.

“I was born and brought up in Helensburgh, and when I was about 10 years-old I used to visit Charlie and his wife on a Saturday morning and Charlie would help me with my painting.”

Kitty, who moved to Milngavie following the death of her father in 2001 and later went to Banffshire, added: “I just wish I had managed to get hold of a painting by him when I was in the locality.” 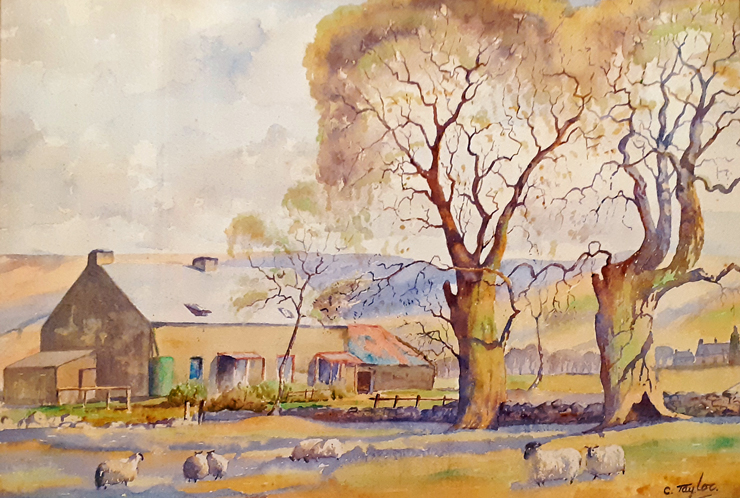 Examples of Charlie Taylor's art: View from Cairndow (top of page); Vase of Pansies, Lilac and Grapes on Table; View of Cottage, View of Loch Lomond; Tamnavoulin, Glen Fruin (bottom). View of Cottage is owned by Jim Horn in Washington, USA, and Tamnavoulin by Meg Carroll in Alva, Clackmannanshire.