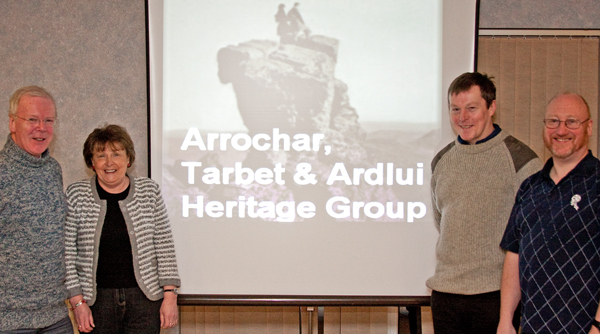 The story of the setting up and growth of Arrochar, Tarbet and Ardlui Heritage Group
written by founder Mrs Mary Haggarty.

ONE day in 2002 while sitting in Arrochar Church reading the Pews News, I saw that our minister, who covers Luss as well as Arrochar, was asking the congregation to look out their old photos and articles so that they could be displayed in the new Pilgrimage centre in Luss.

Being absolutely ‘planted’ in the soil of Arrochar, Tarbet and Ardlui I was horrified — something else disappearing from our villages. So by the time the sermon had finished I had made up my mind that I would need to do something.

In front of me was a gentleman who was of an old local family so I leaned across and pointed out that if he read the second last paragraph in the Pews News he would see God was giving us a message. Where would we start?

I was very aware that the older history covering the years that the MacFarlane's ruled Arrochar, Tarbet and Ardlui had been well documented, but it was difficult to find the social history leading up to where we are today.

The oldest natives sprang to mind. So, I invited the six oldest natives to tea in the Loch Long Hotel. I did not get much information that day, as they were all talking at the same time rattling the spoons round in the teacups, relating all the village secrets: “he wasn’t her father”, “her Granny was a wild woman”, “she never had a penny to her name till she married so and so”.

I realised that I would need another day to hear all they had to tell. Another day — it turned into a fortnightly meeting over two winters.  We were very lucky as the hotel staff said that as long as we were out by 5pm we could use the hotel and there would be no charge for the tea and biscuits. In hindsight it was the best start anyone could have asked for.

I still was having difficulty noting all the information so I asked a few more people to come along and help. This resulted in tape recording the meetings. I had by this time made a ‘route’ that we were following, a geographical line that we could peg the stories to.

It ran from the top of the Rest and Be Thankful down to Ardgartan and Coilessan, then along past the old Torpedo Range up through Succoth to Feolin and from there up to Corrigrogan and Loch Sloy, travelling south again down Glen Loin, through the village of Arrochar to Tighness and down Loch long side reaching Ardmay and Morelaggan.

At this point we travel up the hill and back towards Arrochar coming down again at the Steadings on the Back Road. We then travelled up the road past Tighvechtican, the Station, Ballyhennan, Tighloan and the village of Tarbet, a quick call down to Firkin then on up past Inverhoulin, Inveruglas the Craigenarden Viaduct to the village of Ardlui.

This set the scene of the area we are trying to cover. As the information filled in on the ‘Trail’, the idea came that we could make a Heritage Map.

We soon realised that we would need funding, but to get any funding we would have to be a properly constituted group. Hence, the start of the Arrochar, Tarbet and Ardlui Heritage Group.

Once constituted, we applied for funding and were awarded £5,000. The map was completed, and it was launched by the oldest natives of the village — average age 80 — handing over the map to the schoolchildren.

Things were opening up for the group and it was not long before we were offered a ‘home’ to display our collection of material and photographs in what was the old Ballyhennan Church.

With this opportunity we applied for funding to buy some equipment of our own. A laptop computer, projector, A3 printer and scanner, and some display boards were top of the list.

Membership was growing, as with an annual subscription of only £5 we had plenty of people taking up the offer. We had also started to run six evening meetings over the winter months.

Originally the idea behind this was that people would come along, ask questions, tell tales and stories, and bring their own findings to the meeting. But that is not really how it worked out. Most people liked to sit and listen, so it has ended up with us covering a different local subject each meeting, which was also a good way of collecting material.

In early 2005 Awards for All were giving out grants for areas to record and celebrate the Home Front efforts carried out during World War Two in order to commemorate the sixtieth anniversary of VE Day.

We had a wonderful celebration in honour of Arrochar, Tarbet and Ardlui’s effort in 'keeping the home fires burning'. This is a story in its own right, and we took on the task of recording it in pictures to preserve the story for generations to come.

We also organised an indoor Street Party which well over 200 locals and people who had been in the area during the war attended. The school, other local associations, and even the local hotels have borrowed the banner for projects and the background to Remembrance Day themes.

The winter season opened with Chrissie Fisher and Jean Dawson talking about their school memories. These ladies are two of the first natives of the area who contributed so much to getting the Heritage Group off the ground.

This talk sparked ideas about recording the school history in pictures the way we had with the Home Front memories. Again we applied to Awards for All and to Argyll and Bute Council for funding, and this enabled our project to begin.

We collected all the photographs and material we could find and, as before, contacting people who had been brought up in the villages but had left the area proved a great help. Lots of photographs were uncovered and tales told of childhood memories of attending the school. We also poured through school logs.

This was slightly hampered as, when Arrochar and Tarbet joined Argyll and Bute, their Lochgilphead HQ did not have the room to accommodate all the archives relating to our villages which had been held in Dumbarton Library, so most of ours were sent to the Mitchell Library in Glasgow.

They were not prepared to release the old school log books to Helensburgh or Dumbarton where access to them would have been easier for us, so it meant trips to Glasgow with paper and pencil trying to record the most interesting aspects that the School Board minute books contained.

Eventually we completed the school history banner. It now hangs in the school, and has been commented on by many visitors to the school as well as the Her Majesty’s Schools Inspectorate team during a recent inspection.

Our home in the Ben Lomond over the winters was not proving very hospitable to photos and documents, as like all churches the heat comes from the people and if not well occupied the walls can draw the damp and the cold very easily.

This resulted in the papers having to be removed during the winters. It was now becoming an embarrassment that we had all this material that we really wanted to share with others and it was locked away in a filing cabinet.

Many long discussions took place. What direction would we take? A book? A website? Both? Although the group had started with the oldest natives, by now the active members were now 'the next generation', so a website was the favoured choice.

Again our application to Awards for All and Argyll and Bute Council was successful, and this gave us the scope to engage a professional webmaster to take forward the task.

I got my way about engaging a local man. I will never quite know what ran through Howard Page’s mind when five of us arrived at his invitation at his door. I was armed with a paper layout of how we wanted the site to look and what information we wanted to see on it.

Howard took everything on board without falling out with the group. But the big worry came as Howard’s task was coming to an end — who was going to update the site, add new material and attend to the general running of it?

So imagine my delight when he asked me: “How do you join the group?” Without any delay a webmaster slot was added to our team and the job awarded to him.

It has become an award-winning website, as in 2007 it was nominated in the Nationwide Community and Heritage Awards and the following year won the For Argyll award for the best Heritage Website.

The website opened up contacts from all over the world. Not only were there enquiries about the villages, but also people sent us photographs and material — some of which would never had been returned to the village had we not got our message out there. However the idea of a book has not gone away.

From the website we received many questions on the subject of Genealogy. We try our best to answer all the queries, but sometimes it is quite a task and we started to find ourselves raking around the graveyard on more than one occasion.

This gave a member of the group the idea of cataloguing the Graveyard. So again armed with pen, paper and camera the task was underway — one person writing down the inscription from the headstone while Jamie MacTavish took a photo of it. The webmaster uploaded the information on to the site.

However, this did not solve our problem — instead it added to it in a good way. It meant that people could sit in their homes on any continent of the world and if they had ancestors who they thought came from our villages they could look at our Virtual Reality graveyard online.

Any stories we receive about occupancy of the plots can be attached to the headstone, making it ‘come alive’. We are now trying to complete the same task for the old graveyard at Ballyhennan.

Our next step on the genealogy route was to get the Census Records for the area on to the website in a format that they could easily be read. This proved quite an expensive exercise and we had to take the decision to ask for £20 for access to the records.

The group’s latest project is to try to show the building blocks of how the villages grew through the production of five banners funded by the Heritage Lottery Fund, Argyll and Bute Council, and Scottish and Southern Energy.

The main building blocks are: 1225-1787, the Clan MacFarlane ruled Arrochar, Tarbet & Ardlui for five centuries. 1733, the first church was built by the MacFarlanes. 1767, the school was at Claddoch Mhor. 1800’s, the Victorian era saw the introduction of steamers and the expansion of the local inns.

1841, from the first census record Ardlui was already a thriving farming community. 1887–1894, the West Highland Railway was built by a labour force of Irish navvies. 1908–1986, the Royal Navy Torpedo Range on Loch Long provided jobs.

1925, the Forestry Commission came into the area, and later there was a large programme of restocking after World War Two. 1939–1945, the war years saw the villages playing a significant part in the war effort. 1945–1950, the construction of the Loch Sloy Hydro Scheme resulted in a massive input into the villages.