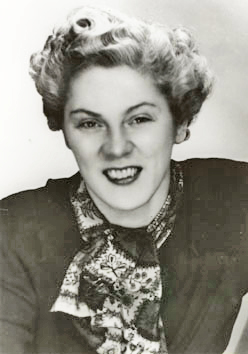 Named as Elizabeth on her birth certificate, but known as Elsie all her life, she emigrated with her family to Edmonton, Alberta, in 1912 where her father opened a drugstore in Bawlf.

She attended Normal School in Camrose, where she obtained a teaching diploma in 1922 at the age of 16, then taught in rural schools for the next four years.

Anne Nothof, of Athabasca University in Alberta, writes in the Canadian Theatre Encyclopaedia: “Her stage play, ‘The Hungry Spirit’, is loosely based on her own experience as a young teacher with a desperate need to improve her own education.”

Next Elsie studied history at the University of Alberta, where she was president of the Dramatic Society and the Literary Society, and women’s editor for the student newspaper, The Gateway.

She also acted in several plays directed by the inspirational teacher and director Elizabeth Sterling Haynes, including James Barrie’s ‘Shall We Join the Ladies?’, which represented Edmonton in the first Alberta Drama League Festival in 1930.

She graduated in 1930 with a BA in history, and returned to rural teaching for the next three years until her marriage to a physics professor and Rhodes Scholar, Dr Edward Hunter Gowan.

For the following 28 years she was active in the Edmonton Little Theatre, serving as a board member, newsletter editor, adjudicator, actor and director. She acted in roles for the University of Alberta’s Department of Drama from its inception in 1946, including George Bernard Shaw’s ‘Caesar and Cleopatra’ in 1955.

Dr Gowan encouraged her to turn her attention to writing, primarily one-act plays, and it was as a playwright that she really made her mark.

The University of Alberta Dramatic Club entered ‘God Made the Country’ in the Alberta Regional Dominion Drama Festival, and it was subsequently produced at the Grand Theatre in Calgary in 1935.

“This play reflects her preoccupation with the plight of isolated rural women, who struggle to survive in constrictive marriages and restrictive environments,” writes Anna Nothof.

“Her protagonist, Freda, feels ‘chained to a homestead like a dumb beast, with weeds and wind and hail killing everything you’d hoped for.’

“’The Giant Killer ‘is a strong statement against war; ‘The Royal Touch’ considers the role of the monarchy; ‘A Toss For Father’ deals with bigamy; ‘Back to the Kitchen, Woman!’ anticipates women’s liberation; ‘One Who Looks at the Stars’ (1946) portrays an inter-racial marriage; ’Breeches from Bond Street ‘(1949) portrays the fate of a mail-order bride in southern Alberta.

“Her three-act comedy, ‘The Last Caveman’, premiered at the Edmonton Little Theatre in 1938 and in 1946-47 was toured by the western professional company, Everyman Theatre, under the direction of Sydney Risk. It depicts the hardships encountered in Alberta by a family lured to Canada by propaganda in the early 1920s.”

But the opportunities for stage production were limited, so Elsie began to write extensively for radio, including two historical series co-written with her friend, Gwen Pharis Ringwood, ‘New Lamps for Old’ (1936-37), and ‘The Building of Canada’, commissioned by the University of Alberta radio station,

Both series were later broadcast nationally by the Canadian Broadcasting Company, and she went on to write about 250 radio scripts. She also taught both writing and radio writing for many years.

Her five scripts for the 1943 NBC Inter-American University of the Air ‘Lands of the Free’ series were heard via short wave in South America, and two were aired by the Australian Broadcasting Commission. Her series, ‘The Barlows of Beaver Street’, was broadcast by CBC Britain and the Caribbean.

Anna Nothof says: “Her historical dramas are typically structured around a family: in the 1943 19-part series, ‘These Are My Neighbours’, she addressed social issues that are still with us: single-parent families, uprooted young people, shifts in employment patterns, working mothers, dependent old age.”

Another facet of her writing was four historical pageants for celebrations in Edmonton and Jasper from 1954-77. They had a common theme of the realisation of personal and community dreams through a united spirit in a frontier environment.

Her writing career effectively ended with her husband's death in 1958, but she remained active in Edmonton as an actress, speaker and instructor. Between 1959 and 1971 she taught as an English teacher at a high school.

She received a Canadian Drama award in 1942, a provincial Achievement Award for Excellence in Literature in 1977, an honorary doctorate from the University of Alberta in 1982, and was inducted into the Edmonton Hall of Fame in 1993.

Anton Wagner, of the Department of Theatre at Canada’s York University, described her as “a complete woman of the theatre”.

He said: “Elsie Park Gowan and Gwen Pharis Ringwood were the leading playwrights in the 1930s and 1940s attempting to create a distinctively Canadian drama.”

Reflecting herself in 1959 on her three decades of work in the theatre and playwriting, Elsie recalled that 'when I was a youngster growing up in Edmonton, all art and literature was from far away.'

She continued: “A poem was what Mr Wordsworth wrote about daffodils, a play was something produced in London, and a book was always written about somewhere else. The world we saw reflected was never our own.

“But now we have books, plays and pictures that mirror our own environment.”