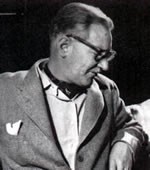 HELENSBURGH-BORN David MacDonald was a director of British films who trained in Hollywood.

Born in 1904, he made some good thrillers — and the occasional comedy — in the late 1930s and immediate post-war years, but seemed to lose his touch after the Christopher Columbus (1949) disaster.

In his twenties he managed a rubber plantation in Malaya, but went to America in 1929, and became interested in film-making.

Cecil B.DeMille hired him as a production assistant, but it would seem from MacDonald's subsequent career that he never developed the master's taste for films of epic stature.

MacDonald went with DeMille on his return to Paramount in 1932, then came to Britain in 1936, making quota films for Paramount British.

MacDonald's first big success came with a series of films, mainly comedy-thrillers, made with Barry K.Barnes, whose career would also disappoint in post-war years.

The pattern of these was set by the first, This Man is News (1938), with Barnes and Valerie Hobson, as a reporter and his girl-friend, tracking down a gang of jewel thieves. A briskly amusing script and MacDonald's snappy direction made this a very lively and entertaining film.

The star trio, Barnes, Hobson and Alastair Sim, were reunited on the equally successful This Man in Paris (1939), and the Barnes-MacDonald partnership continued through Law and Disorder (1940), Spies of the Air (1940) and The Midas Touch (1940) before it was broken up by World War Two.

MacDonald joined the Crown Film Unit for whom he made a stirring documentary, Men of the Lightship (1940). As producer, he was also involved with Roy Boulting's award-winning documentaries, Desert Victory (1943) and Burma Victory (1945).

He began the post-war years well enough, especially with Snowbound (1948), a thriller of claustrophobic menace despite its Alpine setting, with Robert Newton, Dennis Price, Stanley Holloway and Guy Middleton all in good form as men changed by greed, a theme to which MacDonald would return.

He produced three large-scale misfires, one of which, the wordy Christopher Columbus (1949), sank under a surfeit of dialogue and practically took Fredric March's star career with it, although he continued as a star character player.

He never recovered that lost ground, although the following year brought the interesting The Adventurers (1951), again about a group of men — this time Peter Hammond, Dennis Price, Jack Hawkins and Bernard Lee — after, not gold as in (1948), but diamonds in South Africa.

In both films, MacDonald's direction skilfully elicits sympathy for basically good men overcome by desire of riches. A lively swashbuckler, The Moonraker (1958), was a small highlight in the last years of his film career, by which time he was already entrenched in television drama. He died in 1983.