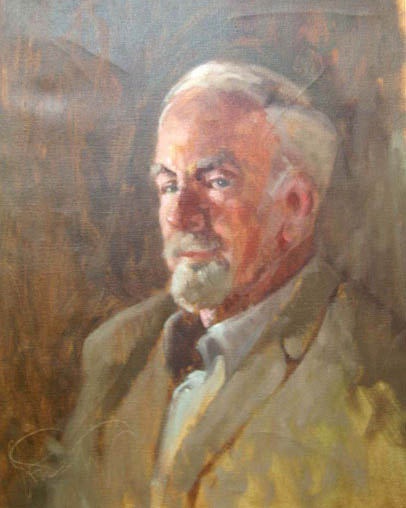 A MUCH admired feature of the exhibition held by Helensburgh Heritage Trust in April 2007 to mark the centenary of the birth of burgh artist Gregor Ian Smith was an excellent portrait of him by Jon Peaty.

The property of Helensburgh and District Art Club, it was lent to exhibition organisers Helensburgh Heritage Trust for display and also for use as a publicity image.

At the very successful month-long exhibition in Helensburgh Library, a number of visitors asked about the portrait and Mr Peaty, but little seemed to be known about him. There the matter rested — until January 2008.

The artist’s son, David Peaty, who lives in Shoreham-by-sea, West Sussex, was searching the web for information about his late father when he found the image on the website of the 2007 Lomond and Clyde Springfest which coincided with the exhibition.

He emailed Springfest organiser Anne Urquhart and asked about the source of the image. She passed on the message to the Heritage Trust, and they asked Mr Peaty for more details about his father — and the Art Club if they knew any more.

Both inquiries produced fascinating information. David Peaty was first to respond with detail about Jon Peaty, who was born on March 7 1914 and died on January 26 1991.

He says: “Jon lived the last 20 years of his life in North Yorkshire, on the edge of the Wolds following early family life in Wales, London and Sussex. From the 1960s onwards he lived by painting landscapes and portraits and teaching.

“What a characterful image of Gregor Ian it is too. JP was often at his best when painting fast, and with a degree of 'free sketching' — which I detect here. It is very likely that this painting was the result of a 'demonstration' given to the art club either by specific invite or, more likely, when Jon was in the area teaching . . . probably in the early 1970's.

“I only have knowledge of his being a tutor on painting weeks in Kirkcudbright. I know that is not your area, but perhaps Gregor Ian went on these events — or indeed other teaching weeks in parts of England and Wales — as a participant and was invited to sit as a model?

“It was not uncommon for the sitter to be handed the painting at the end of the process. Maybe the connection was a longer standing friendship? Of course this is all speculation.

“I have a considerable amount of Peaty archive material and more turns up on a regular basis. Unfortunately I have not yet put together a coherent biography but hope to do so in due course.”

Meanwhile, the secretary of the Art Club, Anita McLaren — herself a very talented artist whose work is much in demand locally — was busy finding out the background to the club’s ownership of the portrait.

“It was done in 1980 at the Clyde Community Centre in Helensburgh,” she said. “A previous president of the club and his son, Brian Weston, had been on painting courses run by Jon Peaty in Sandsend, near Whitby, and in Kircudbright. They arranged for him to come up to Helensburgh and take a week's course of painting — which was oversubscribed!

“He painted Gregor Ian Smith as a demo in 75 minutes, and the club then bought it as Gregor Ian had just been voted honorary president of the club. It is kept in the Library and looked after by the Anderson Trust, which has a collection of paintings of local interest.”

For those who knew Gregor Ian, it is incredible to think that such a splendid likeness was created in so short a time.