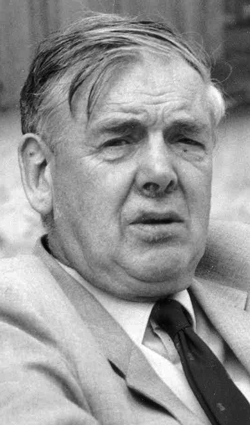 A MATHEMATICIAN from Helensburgh is considered to have been one of the outstanding problem-solvers of 20th century maths.

John Hammersley, who was born in Morefield, Granville Street, on March 21 1920, formulated many problems of significance for theoretical and applied science, and made remarkable progress towards their solutions.

He is famous worldwide as the founder of the mathematical theory of percolation.

His father, Guy Hammersley, was employed in the American steel trade mostly in London, and worked his way from office boy to European manager during the 1920s. His mother, Marguerite Whitehead, was born in Moscow in 1889, and was sent to boarding school in England in 1903.

They married in 1914. John Michael Hammersley was born in 1920 and was about five years-old when the family moved to Bishop’s Stortford. He went on a scholarship to Sedbergh and from there, again as a scholar, to Emmanuel College, Cambridge, in 1939.

Military service from 1940 to 1945 interrupted his studies, but while he was in the Army he developed a range of technical expertise in radar and gunnery, and ended up responsible for the radar installations of the gun sites defending Scapa Flow.

When he was put in charge of the computations analysing the performance of anti-aircraft equipment, he introduced a reform of which he was proud, replacing the seven-figure tables of trigonometric functions with four-figure ones which were amply accurate.

He ended the war as a major, then returned to Cambridge where he graduated as a wrangler (first class honours), but was disappointed to miss his half-blue for skiing by one place. However, he was in a joint Oxford-Cambridge team which lost to the combined Swiss universities.

In 1948 he joined the three-man department of design and analysis of scientific experiment in Oxford, then the university’s sole provision of statistical services. He taught for Trinity College until 1955 when he moved to the Atomic Energy Research Establishment at Harwell as its principal scientific officer.

Four years later he returned to Oxford, to Trinity and to the Institute of Economics and Statistics. He continued his research even after his retirement in 1987, publishing on the dendritic growth of crystals and the growth of Eden clusters.

In 1990 he was honoured with a conference at the Mathematical Institute in Oxford to celebrate his 70th birthday. Many colleagues and friends came to wish him well and to speak about work which had been influenced by his contributions.

As well as holding doctorates from Oxford and Cambridge, he was awarded the Von Neumann Medal (1966), the Gold Medal of the Institute of Mathematics (1984) and the Pólya Prize of the London Mathematical Society (1997). He was elected a Fellow of the Royal Society in 1976 and was Rouse Ball Lecturer at Cambridge in 1980.

A gentleman of the old school, he had very high standards. Curious and original, he was always stimulating and wonderfully entertaining company.

His former doctoral student Professor Geoffrey Grimmett of Cambridge wrote in a tribute: “John Hammersley was a pioneering mathematician of enormous intellectual power. He was passionately involved in creating mathematics for modelling and solving practical problems.

“His favourite activity was getting to grips with a good problem, and in this he gave inspiration to many. Despite his love of rigorous analysis, he did not hesitate to turn when necessary to calculators, and he was a master of the mechanical desk calculator and the early computer.

“He once boasted of holding the 1961 world record for keeping a computer — at Bell Labs — working without breakdown for 39 hours.

“He preferred what he called `implicated mathematics' over `contemplative mathematics', that is, he found the solution of problems to be superior to abstract theory or `high-rise mathematics'. He posed and solved some beautiful problems, among the best of which are self-avoiding walks and percolation.

“He was delighted to learn in retirement of the recognition accorded thereto by mathematicians and physicists, and of the enormous progress made since his own pioneering work. He sought through his uncompromising and combative style to provoke and to stir. He was often successful.”

He was happily married to Gwen Bakewell for 53 years, and she and his two sons Julian and Hugo survived him after his death in Oxford on May 2 2004 at the age of 84.