A key figure in the final years of the Town Council, he also served with distinction on its successor, Dumbarton District Council, in which he carried the Conservative banner in a Labour-controlled authority, and he then went on to serve on Argyll and Bute Council.

He lived in the burgh for 46 years and had dearly wished to play a part in the bicentennial celebrations in May 2002, but sadly died at the end of March of that year after 90 years of vibrant life.

That life began in 1911 in Pollokshields, Glasgow, when he was born into a privileged family, the youngest of nine children. They also had a summer home at Blairmore, from where he made a daily journey by ferry to Greenock and then on by train to Glasgow Academy.

At Glasgow University, where he graduated with an MA, he became involved in student politics.

He married his general practitioner wife Janet in 1936, and two years later, faced with the possibility of the Second World War, he joined the Territorial Army as a member of the anti-aircraft artillery, serving for much of the war in the rank of Major.

He was in charge of a battery which shot down 149 ‘doodle bug’ flying bombs at Dover at Folkestone. After the war he remained with the Territorials until 1956, when he retired as a Lieutenant Colonel. He was twice awarded the Territorial Decoration.

In the post-war period, along with his brother Archie and later his son Douglas, he rebuilt the family wholesale and retail business in Ingram Street, Glasgow. They also had a branch in Perth for a few years.

But his heart lay in politics, and he tried repeatedly but unsuccessfully to be elected as an MP, fighting six General Elections from 1946 to 1966 — the first one as a Liberal candidate, and the rest as a Conservative. He was narrowly defeated twice in Dunbartonshire and three times in Glasgow Woodside.

However in 1966 he was elected to Helensburgh Town Council, succeeding former Scottish rugby internationalist and referee W.C.W. ‘Copey’ Murdoch, and a quite outstanding career in local government began.

He soon rose to the key post of Burgh Treasurer, then served as the last Provost from 1970-75. At the same time he represented the town on Dunbartonshire County Council.

During his years on the town council there was considerable modernisation, with a new sewage scheme, the opening of a modern indoor pool, a record-breaking house building programme, significant support for the Charles Rennie Mackintosh mansion Hill House, and the provision of new car parks off Colquhoun Square, beside the pier, and next to the Central Station.

From 1975 he served on the new Dumbarton District Council, using his financial acumen to keep the Labour administration in check and always battling for the interests of Helensburgh.

His devoted service was acknowledged in 1984 when he was awarded the CBE. He retired from local authority work in 1996. 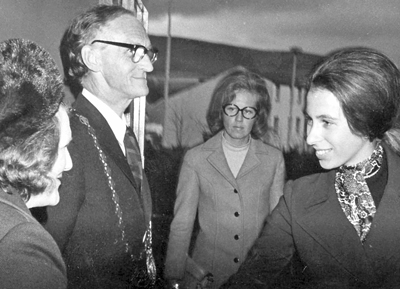 In later years he very much missed his wife Janet, who died some years before he did. They brought up four children at their Cawdor Lodge, Sinclair Street, home, and had 13 grandchildren and three great grandchildren.

He was very much the head of the family, was immensely proud of them all, and never forgot a birthday.

Janet was a great enthusiast for and leader in the Girl Guide movement, and Norman was given the post of honorary president of the Helensburgh Girl Guides — not usually an office held by a man — in recognition of the part he played in the provision of a new guide hall. They are pictured (above) being presented to Princess Anne on a visit to Helensburgh in November 1971.

A long serving member of the West Kirk, he served the church in many ways, particularly in the fields of social service and advocacy support in the fight against poverty and crime, both at home and abroad.

He helped provide holidays for disadvantaged families, provided practical help — often from his own front door — for those in trouble, never fearing for his own safety. Even in his last years he took small children to school and nursery, and took in homeless people in his flat rather than have them sleep rough.

His final public service was as honorary president of the Heritage Trust, but typically he only accepted the post on condition he could actively participate, which he did.

In his later years he lived at Queen’s Court, which was developed when the Queen’s Hotel closed. Under its previous name of the Baths Hotel it was the home of Henry Bell, the town’s first Provost.

The fact that the first and last Provosts lived there is marked with two special Provost’s street lamps in front of the building. A street in upper Helensburgh, Glen Drive, was also named after him.

At his funeral in the West Kirk, the minister, the Rev David Clark, described him to a packed church as a ‘pure, steely, sharp diamond of a man’. Guided by solid Christian faith, he was a man who loved people and most particularly children, whose innocence captivated him to the end.