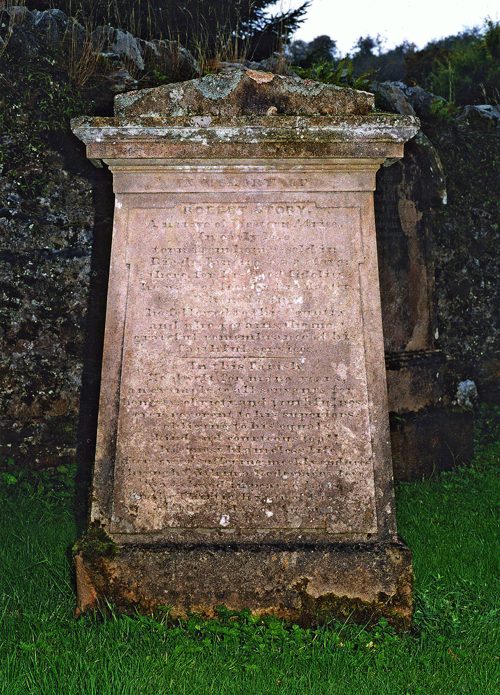 A WEATHER-BEATEN headstone in a Rosneath Peninsula graveyard is believed to mark the grave of the only African slave ever buried in Scotland.

The grave, tucked in at the side of the St Modan’s Church cemetery at Rosneath, bears the name Robert Story, and a Victorian inscription, written by the slave’s master, praises him for his honest and devout service.

It was restored in 1982 by the then Dumbarton District Council at the request of Rosneath and Clynder Community Council.

Although the gravestone bears the name Robert Story, that was not the slave’s name . . . he did not have one. He assumed the name of his master, the Rev Robert Story, minister of the then Rosneath Free Church.

A good friend of Mr Story, Stewart Kerr from Kelso, travelled to Trinidad early in the 19th century, and while there he bought a young slave out of slavery, and put him to work while paying him a fair wage.

The bond grew between the slave and the man who had saved him from a life of cruelty, so when the time came for Mr Kerr to return to Scotland the slave begged to be allowed to go with him.

His plea was granted by Mr Kerr, and he and the slave journeyed to Scotland. Unable to keep the slave himself, he asked the Rosneath minister to look after him and give him a good home.

Mr Story agreed, and the African began to work at the manse of the Rosneath Free Church.

The African and his master continued to live and work on the peninsula for some years, the minister treating the African as an equal and the African becoming a devout Christian and servant to his master and the village.

He died peacefully at the end of 1848 at the age of 30 and was buried quietly in a secluded part of the graveyard, the minister giving his old friend a bigger and more grand headstone than he himself was to be given some eleven years later.

The minister of Rosneath Parish Church at the time the headstone was restored, the Rev T.Forrest Smith, said: “Robert Story was 150 years ahead of his time. He achieved what people are now only beginning to in this country . . . an acceptance of colour.

“And he placed the slave’s grave inside a white man’s graveyard, although at the side, which was a great honour for a coloured man in those times. The stone is one of the most impressive in the graveyard.”

■ Coincidentally, a negro nanny’s grave can be found in the churchyard of Cardross Church.

The stone is in “affectionate remembrance” of “Felicity Oglevie (Negress. Native of West Indies)”, who is believed to have died on May 22 1829 at the age of 19, after being the nanny to Miss McKinnon who lived at Auchenfroe in Cardross.

The stone is weathered beyond recognition, and another expert who studied it claimed that she was Felicity Ogilvie who died at the age of 41 — and this is thought to be more likely.

■ A story is also told that around 1820 a slave jumped ship from an American trading ship anchored offshore from Helensburgh. He was being rowed ashore in a skiff, but was pursued by another boat.

His cries attracted a small crowd to the beach, their threats deterred the Americans, and so he was free.