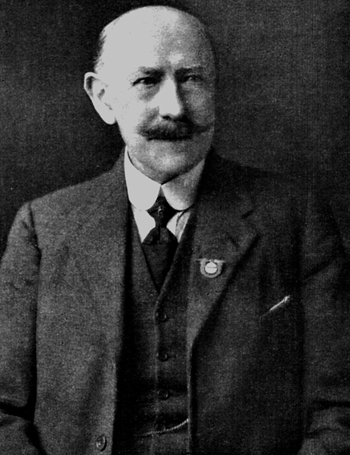 MOST people cultivate flowers and vegetables in their gardens . . . but one Helensburgh scientist claimed to manufacture diamonds in his.

James Ballantyne Hannay is a name known to few, but nevertheless it is a name which left its mark on the scientific world in no uncertain terms.

His patented inventions numbered over 80 and included an industrial lighting device, anti-fouling paint for ships, and a means of extracting gold and other precious metals from ores.

The Hannay Patents Company was later renamed the Glasgow Patents Company. He also started mining a new Scottish mineral at Bowling, but stopped when he could not find a commercial use for it.

But his main claim to fame is that, at the age of 25, he was the first person to make diamonds artificially.

The minute samples he handed over to the British Museum have been analysed by experts a number of times over the years. Sometimes they were declared not to be man-made diamonds, but a century later it had been well established that synthetic diamonds could be made.

Now there is so little remaining of the original samples that it is no longer possible to do any further tests, but the presumption has to be that he did succeed.

James was born at 45 Kelvingrove Street, Glasgow, on January 1 1855, and his master baker and property developer father Alexander Hannay owned the Grand Theatre in the Cowcaddens, as well as some property in Helensburgh he had bought from Sir James Colquhoun.

Later they moved to Westburn, 50 Campbell Street, where he attended the then Larchfield Academy. He had his own laboratory in the house, which at that time was accessed from Stafford Street, and he made fireworks and special effects for the theatre. The family also owned nearby Woodburn, on John Street.

As a teenager he worked in the Shawfield chemical works, then became a demonstrator and lecturer at Anderson’s University, a forerunner of Strathclyde University.

His strange experiments in diamond synthesis are believed to have been carried out at the bottom of the leafy Westburn garden, well away from the house because of their explosive tendencies, and also at his laboratory beside an Italian restaurant and delicatessen at 234 Clyde Street, Glasgow, called Fazzi's. He was helped by his sister Margaret, who later became Lady Dugald Clark.

All that remains now of his kiln is some bricks beside the small burn which flows through a small ravine in the garden.

It was in 1880 that he claimed that he had made the diamonds by heating a mixture of paraffin, bone oil, and lithium to red heat in the sealed wrought-iron tubes. He heated the tubes to 900 degrees centigrade for 14 hours.

Sir Robert Robertson discovered in 1934, three years after Hannay’s death, that there are two types of diamonds, of which type 2 is the rarer form. Hannay’s diamonds have been tested and found to be type 2.

In 1943 the samples were re-examined by Professor Kathleen Lonsdale at the British Museum and declared to be diamonds, but in 1962 she examined them again and changed her mind.

But another expert in the field, Professor R.V.Jones, wrote in 1975: “It is most unlikely that he would by chance have picked all his samples from the second and rarer type of diamond should he have faked the results of his experiments.” 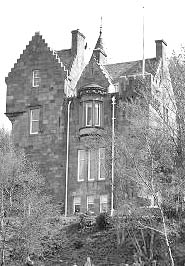 One feature of Hannay’s experiments were the extreme heats and pressures he used, and tests by an American, Dr Einar P.Flint of the U.S.Bureau of Mines in Washington, who was researching Hannay and visited Westburn, proved almost beyond doubt that the bricks in the garden were the bricks used in his furnace.

Hannay used wrought iron tubes for his experiments and subjected them to such internal pressure that in nine cases out of ten the tubes exploded.

He wrote at the time: “The continuing strain on the nerves, watching the temperature of the furnace, and in a state of tension in case of an explosion, induces a nervous state which is extremely weakening.”

There is a story that he owned a dye works in Hamburg which specialised in aniline dyes, and that this provided him with a considerable fortune. But this is rejected by Dumbarton historian David Harvie FSAScot, who has studied Hannay's life and work.

But he did amass considerable riches, which enabled him to buy Cove Castle (left)  — built in 1867 by James Sellars — in 1883 when he was 28. He also had a private laboratory in Sword Street, Glasgow.

He married Caroline Johnston and they had three daughters, Edith, Ethel and Eva. Mrs Hannay and the girls, who were said to be very good-looking, lived at Cove, but James apparently spent most of his time in London. A fourth child died in infancy.

David Harvie says that the couple had a stormy relationship. By 1890 they were fighting with each other, the following year divorce proceedings began, but they were abandoned the year after.

His mother died tragically at Westburn in 1892 when she collapsed into a fireplace and burnt to death. Two years later his father died, and he left Westburn to his daughter.

Eva inherited Cove Castle which she either gave or sold to the Scottish Youth Hostels Association, and she ended her days in a flat in Glasgow.

The local reputation Hannay left behind him was of a well-educated, well-connected man who squandered most of his money, a brilliant man in many ways, a dogmatic atheist and somewhat difficult to get on with.

Hannay (below right, at the age of 75) eventually came back to Cove mentally ill and finally died in the Glasgow Royal Mental Hospital, now the older part of Gartnavel, on March 17 1931. He is buried in the Barbour Cemetery at Cove. 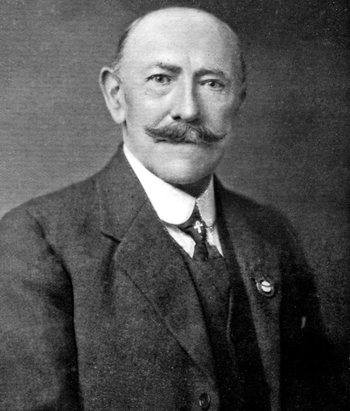 Professor Jones actually met Hannay in 1917 when he stayed at Oxted in Surrey, and remembers him as a kind man who provided him with his first toy plane.

Why he was in Oxted is not known, but the professor recalled him saying that he owned a castle at Cove and that he had been in trouble with the navy during the war because he had erected a searchlight on the castle roof. He was told to dismantle it.

The professor’s mother was suspicious of him and thought him to be a spy, as he complained about leaving money in Germany. She was not the only one to suspect Hannay, as many of his colleagues cast doubts on his work.

In later years Hannay turned from scientific investigation to explore aspects of the origin and development of religion, and he published a number of controversial works critical of the Hebrew Scriptures, claiming that there was sex symbolism in religion. He even wrote a book entitled 'Phallicism The Universal Religion'.

He believed that the ancient Romans perpetrated an enormous fraud by inventing the Hebrew language and thereby enslaved European culture.

■ To this day, artificial diamonds are made in Mexico from the drink tequila.