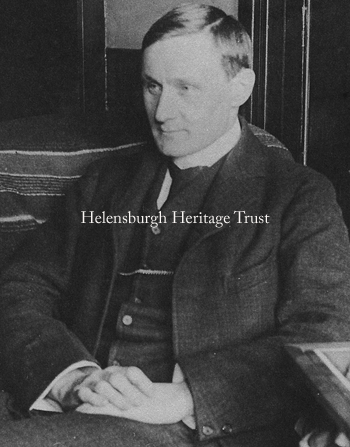 CARDROSS has an important place in the history of aviation — as it was the scene of the first successful controlled glider flight on September 12 1895.

Percy Sinclair Pincher managed to keep a glider called the Bat off the ground at a height of 12 feet for all of 20 seconds, the first controlled glider flight in Britain.

The glider was home-made, weighed 45 lbs and had a wing surface area of 150 square feet. However the 120th anniversary on September 12 2015 passed almost unnoticed.

Percy, who was born in Bath on January 16 1866 to a Scottish mother, used the fields of the thriving Wallacetown and Auchensail Farms near the village for his experiments with three different gliders between 1893 and 1896.

He could well have become the first person to achieve controlled, powered, heavier-than-air flight well before the Wright brothers, had he not been tragically killed in a glider accident.

Percy joined the Royal Navy in 1880 but resigned seven years later to become an apprentice with the shipbuilders, Randolph, Elder and Company, of Glasgow. He worked for the Southampton Naval Works from 1989-92, then returned to Glasgow as an assistant to Glasgow University's recently appointed John Elder Professor of Naval Architecture, John Harvard Biles.

In 1894 he was appointed a private assistant to Professor Biles, to lecture on marine engineering to the naval architecture students. He left the university in 1896 to work for Maxim & Nordenfeld, and two years later he formed a business partnership, Wilson & Pilcher.

He had a growing interest in aviation and began building the Bat, which flew for the first time that day in 1895.

Later that year Percy met Otto Lilienthal, who was the leading expert in gliding in Germany. These discussions led to Pilcher building two more gliders, the Beetle and the Gull. Soon he became interested in power flight as well. 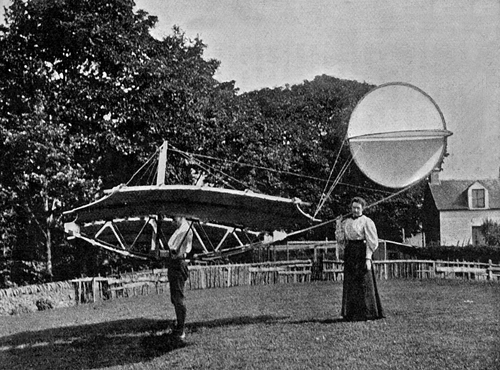 Lilienthal was killed on August 10 1896, while flying one of his gliders in Berlin, and Percy now became the favourite to be the first person to build a powered flying machine. 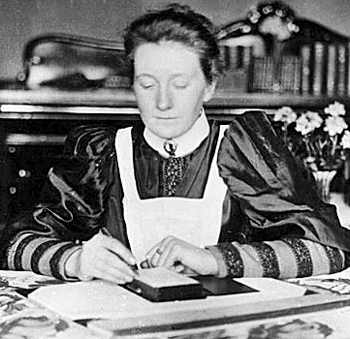 His fourth glider, the Hawk, which he built with his sister Ella (right), who sewed material in the flat they shared in Byres Road, Glasgow, was influenced by Lilienthal’s ideas. Ella and their cousin Dorothy Rose both enjoyed brief flights.

This glider had lightweight wheeled landing gear and broad wings.

In the late summer of 1896, south of Eynsford in Kent, he regularly flew the Hawk from both sides of the hill known as the 'knob', achieving glides of up to 300 yards.

On June 20 the following year, he gave his first public demonstration at this site to a large party of scientists and others.

A thin 600-yard fishing line was passed through a fall of tackle on the opposite side of the west valley.

Towed by three boys, the man and machine rose to a height of about 70 ft, when the line broke. Pilcher descended gracefully into the valley, having achieved a glide of between 150 and 250 yards.

That day Dorothy Rose made a short towed glide in the Hawk. She flew down the hill and collided with a man operating a cinematograph camera, but fortunately both camera and operator escaped serious damage. Later that year Percy broke the world record for flight when his glider covered 820 feet.

Next, in collaboration with French-American aeronautical designer Octave Chanute, who gave him the idea of using multiple wings, and with British engineer Sir Hiram Maxim, who had designed a suitable propeller, he developed a new triplane with a 4 h.p. engine that drove two propellers. Its construction put him heavily into debt, and he needed sponsorship to complete his work.

On September 30 1899 he planned to make his first test flight of the triplane at Stanford Park, Market Harborough, in Leicestershire.

The weather was bad and Percy was forced to postpone his attempt to become the first man to make a powered flight. In order to appease the large crowd that had turned up to see the show, he decided to take up his glider, t 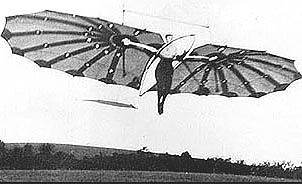 He reached a height of nearly 30 feet when the wire in the tail snapped. He crashed to the ground and died two days later at the age of 33. As there was no-one to carry on his work, his new powered triplane was never flown.

He is buried in Brompton Cemetery, London. A stone monument to him stands in the field near Stanford Hall at the point where he crashed, and a full sized replica of the Hawk is also displayed at Stanford Hall.

The actual Hawk glider has been on show at the Museum of Flight at East Fortune in East Lothian since 1993.

In 2003, a research effort carried out at the School of Aeronautics at Cranfield University, commissioned by the BBC2 television series 'Horizon', showed that Percy’s design was more or less workable, and had he been able to develop his engine, it is likely he would have succeeded in being the first to fly a heavier-than-air, powered aircraft under control.

A replica of his aircraft was built, and, after some problems, achieved a sustained controlled flight of 1 minute and 26 seconds, significantly longer than the first flight of the Wright Brothers. In addition, this was achieved under dead calm conditions, whereas the Wrights needed a steady 25 knot wind to achieve enough airspeed on their early attempts.

Percy Pilcher was one of the two original vice-presidents of the Glasgow University Engineering Society. The Pilcher Memorial Lecture was founded in his memory, and the first lecture was given in 1996.

On December 17 2003 Elizabeth Cameron, Lord Provost of Glasgow, unveiled a plaque dedicated to Percy at Glasgow Airport to celebrate the 100th anniversary of Powered Flight. The ceremony took place in the airport VIP lounge which was renamed The Pilcher Suite.

A book entitled 'From Pilcher to the Planets', written by Dugald Cameron, Roderick Galbraith and Douglas Thomson, was launched at the event and members of Glasgow University Air Squadron flew over the fields in Cardross where Pilcher made his first glider test flights.

On June 17 2006, a monument to celebrate Percy's life was unveiled at his flying site at Upper Austin Lodge — now a golf course — near Eynsford by David Forrester, Percy's nearest living relative.

The ceremony was interrupted for a few seconds while 100 Squadron Royal Air Force provided a flypast of an aptly named Hawk T1. Aviation historian Philip Jarrett then gave a talk about Percy and his association with the site at Eynsford in 1896 and 1897.

In December 2007 a replica of the Bat was unveiled at Prestwick Airport.

It was built by aviation enthusiasts after studying drawings and period photographs for a decade, and will be put on display at Glasgow's Riverside Museum when the building — which will replace the Kelvin Hall Transport Museum — is completed on a site adjacent to the Glasgow Harbour Development. It is due to open in 2010.

Quentin Wilson (72), chairman of the Prestwick branch of the Royal Aeronautical Society, said: “It was extremely satisfying, thrilling and a great relief to see the project finally completed. This is the only replica of a Pilcher Bat in the world, and I am glad other people will be able to enjoy it and learn about this great pioneer.

“Glasgow is a fitting place for it to be kept, as he did much of his work there.”

October 2008 was the 100th anniversary of the first machine powered flight in the United Kingdom, and to

mark the event the Prestwick branch still hope to erect a monument to Percy somewhere in the Cardross area.

Said Mr Wilson: “Percy Pilcher was a remarkable man who made a valuable contribution to the history of aviation. Much of his work took place in Cardross, and it would be nice to see that remembered.” 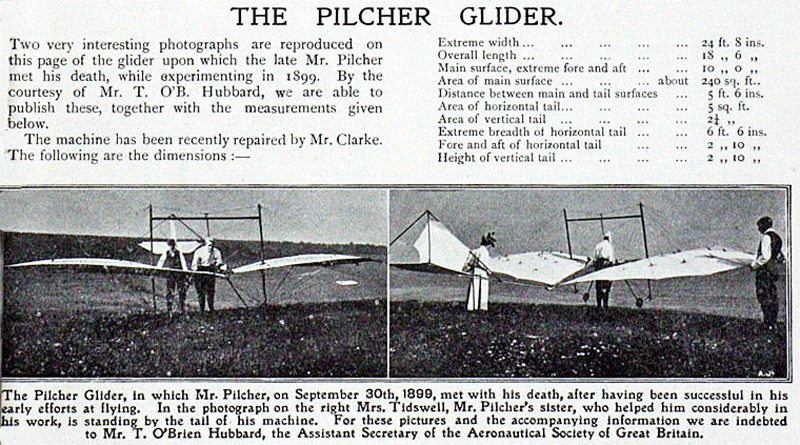