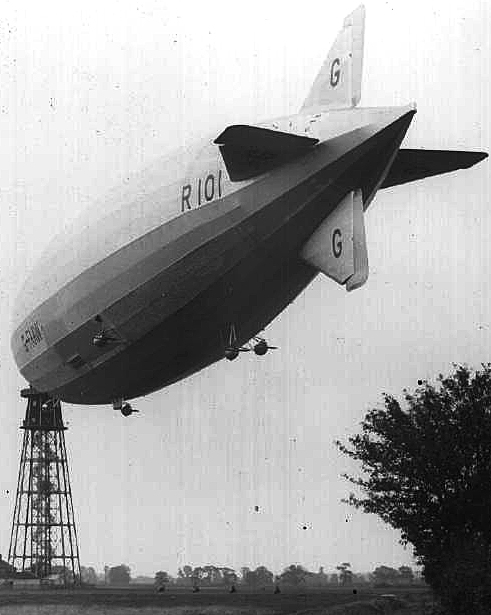 A FORMER pupil of a Helensburgh school was one of the victims of the R.101 disaster in 1930 which led to the abandonment of the British airship programme.

One of three brothers, Noel Grabowsky Atherstone was born at St Petersburg in Russia in 1894, and came to the burgh to be educated at Larchfield School, which is now part of Lomond School.

After leaving the Colquhoun Street prep school he went on to Winton House in Winchester and then Charterhouse.

He joined the Royal Navy as a Cadet in 1913 and was appointed to HMS Highflyer for training. At the outbreak of the First World War he joined HMS Gibraltar and served with the 10th Cruiser Squadron, Grand Fleet and destroyers.

In 1917 he transferred to Airships, becoming a pilot, and the following year he was appointed First Officer of R.29 and was awarded the Air Force Cross. He returned to the navy in 1919 and then retired to Australia, as did his parents.

At first he took up farming in the Gipplsland area of Victoria, but then moved to Terang in the same state where he worked for a time at the Trufood factory. But he soon decided on a return to flying.

In 1926 he was promoted to Lieutenant Commander RN (Retd.) and the next year he quit Australia on being appointed to the Royal Airship Works at Cardington in Bedfordshire for airship duties.

The airship programme was devised in 1922 by the Secretary of State for Air, Christopher Thomson, who became the leading motivator of the programme, eventually giving his life to it along with the rest of his distinguished guests aboard the R.101.

Work began in 1924 to build two vast deluxe rigid construction airships, the R.100 and the R.101, designed to carry 16 tons of cargo and 100 passengers plus baggage, and to fly non-stop in all weather up to 3,500 miles and beyond.

The main objective was to put the British Empire in the forefront of international aviation, and both ships were funded by the government. The R.101 was built by the Air Ministry at Cardington, and the former Helensburgh schoolboy (left) was appointed First Officer in 1929.

The R.101 was seen as a lavish two-deck floating hotel, with open promenades and public spaces unique in the skies. It had a dining room which for 60 diners and a smoking room which could seat 20.

Compared to the noisy, smelly and tiring journey in an aeroplane, the airships were seen as pure luxury, with service comparable to that of the great ocean liners.

On October 4 1930, the R.101 lifted off from its mooring in Cardington and set course for Karachi in India, via Egypt, after only receiving an airworthiness certificate that the same day.

Shortly after the airship reached France it was battered by heavy weather and a bad tear in the outer cover appeared. The high speeds of the airship contributed to a worsening situation, finally affecting the gas-bags in the nose.

As the gas escaped, the airship descended, hitting the ground at 2.09 a.m. on Sunday October 5, on a hillside near Allone in France, not far from Paris.

Highly inflammable calcium flares, which were used for navigational purposes, ignited on contact with water, which now filled the control car.

There was a large explosion as the hydrogen gas caught alight and the airship was ablaze in minutes, resulting in the deaths of 48 men, including Brigadier General Lord Thompson, Secretary of State for Air, and Sir Sefton Brancker, Director of Civil Aviation.

Full state honours were given to the victims as special trains were laid on to transport them to Boulogne. The bodies were loaded on to HMS Tempest and taken to Dover where a special train took them to London's Victoria Station. 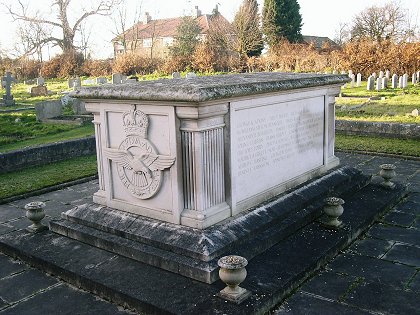 From there they were carried in state to the Palace of Westminster to be formally identified, then lie in state. Many members of the public waited long hours to file past the coffins to show their respect.

A memorial service was held at St Paul's Cathedral on Saturday October 11, after which the coffins were taken by train to Bedford, then carried two miles to Cardington.

All 48 bodies were laid to rest in a special grave in a funeral attended by hundreds of people, including many dignitaries.

In 1931 a memorial tomb (right) was completed and inscribed with the names of the victims, including Lt Cdr Atherstone, and it dominates the tiny churchyard.

Helensburgh Heritage Trust president Professor Malcolm Baird commented: “Nevil Shute in his autobiography 'Slide Rule' has given an insider's view of what led up to the R.101 disaster.

“It covers his engineering career as an airship designer on the R.100 and as managing director of Airspeed, one of the major British aircraft companies prior to World War Two, and gives an account of the competition between the privately produced R.100 with the state produced R.101.”

Stephanie Carmichael, of Portincaple, writes: Back in the mists of time — 1961 — my father was stationed at RAF Cardington and our married quarters were in Thomson Avenue, next to Brancker and Scott Avenues, names as a tribute to some of the dead.

Our home was nearby the gigantic airship sheds which were 180 feet high and 812 feet long. They were used when we were there to house barrage balloons for weather prediction and parachute practice, where poor squaddies had to leap from a wicker basket hanging below.

The tower, or, more correct, mooring mast shown in the photograph no longer exists. It was dismantled and melted down in 1943 for the war effort.

My journalist mother, in the Bedfordshire Times on September 29 1961, waxed lyrical about how we recall the past and asks: “Will Bedfordians of the future regard the Cardington airship hangers as ancient monuments?”

Well yes they do. They are listed buildings and a fitting reminder to all who pass by of the 48 lost souls, including Helensburgh’s own Lt Cdr Atherstone.