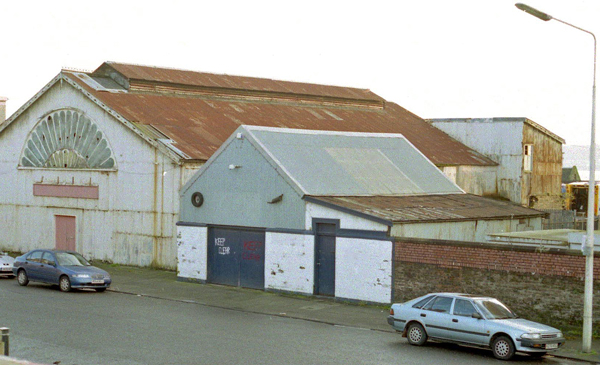 AN important piece of Helensburgh history was demolished in December 2005, after having become an eyesore.

The decision to demolish the old drill hall at 75 East Princes Street brought to an end a long battle for permission to pull down the corrugated iron building.

It was a B-listed building, and was apparently an outstanding example of that kind of construction, which is why Historic Scotland strongly resisted Argyll and Bute Council's efforts to clear the site. It was one of the largest corrugated-iron structures in Scotland, and had an unusual fan-shaped window.

To many, the wonder was that the unsightly rusty structure did not fall down while all the talking was going on — it was certainly dangerous, with warning notices posted around it.

For several decades the hall had been the home of local badminton, and in particular the annual Helensburgh and District Badminton Tournament, and it also served as a mecca for table tennis. Such activities gradually departed as the leaking roof led to slippy floors too dangerous for sport.

But its history went a long way further back. It was designed by Isaac Dixon and manufactured at Windsor Iron Works in Liverpool, then transported in pieces to Helensburgh and re-erected.

According to '200 Years of Helensburgh', the bicentenary book produced by the Heritage Trust in 2002, it was already in use as a drill hall before the First World War broke out.

It was the base of the Volunteer Rifles, or to be more exact, (A) Company of the 9th (Dunbartonshire) Princess Louise Battalion Argyll and Sutherland Highlanders.

It was from there that the young men left for France, only to be caught in one of the worst gas attacks of the war at Ypres, and they suffered many casualties whose names are recorded on the burgh War Memorial in Hermitage Park.

During the World War Two it was again the home of the Volunteer Rifles, by then 162 Company of the 54th Light Anti-Aircraft Artillery.

Some of these men served in France until its fall, and also assisted for a time in the defence of Gibralter, while at home they manned gun emplacements on the hill above the burgh and practised their marksmanship on the rifle range which can be still be seen up the hill from the reservoirs.

Later some served in the D-Day landings in France, and later still with the Field Security Police in Germany after the war ended.

The building meant much to many people for a long time. It is hoped that whatever replaces it on that site might bear a small memorial as a reminder to future generations.