What follows is the second of four accounts of the tragedy.

This article, entitled “57 Hours Under Water — Thrilling Rescues from a Submarine”, appeared in The Times of November 21, 1918, although the actual incident took place on January 29 the previous year.

Strangely, this account does not name the skipper, Lieutenant Commander Godfrey Herbert, who played such an important part in the whole incident, and it is very much in the style of a newspaper report of that era . . .

Of the many thrilling stories which might be told of naval heroism during the war, few, if any, can rival that of a British submarine which went down in the Gareloch, near the Clyde.

The story has in part already been told, as it related to the act for which the late Captain Goodhart D.S.O., who was captain of the not yet completed K-14, was posthumously awarded the Albert Medal in gold, as announced in The Times on the 24th of last April.

The submarine was on her trials. She had on board 73 persons, including naval contractors and men from the yard where she had been built.

The order was given for her to submerge, and when she had just gone beneath the surface water began to pour into her aft, and she descended stern downwards into 15 fathoms. The ventilating shafts had been accidentally left open.

Those in the rear of the submarine, 31 in number, were immediately drowned. The forepart of the vessel was shut off, and the 42 who were at that end were saved. How their rescue was accomplished is a tribute to the skill of the Admiralty Salvage Department.

A few hours had passed before divers went down to the submarine on what they considered a forlorn hope. Getting to the bottom, they discovered that the stern of the vessel was embedded in many feet of mud. They knocked at the hull, and to their amazement, there was a responsive tapping, showing that some at least of those inside were alive.

Then Captain Goodhart essayed the task which cost him his life. The high-pressure air bottles were brought into use, and the captain undertook, with their aid, to be projected through the conning tower and shot into the water in the hope of reaching the surface and conveying to the rescue party information as to the condition of those below.

He was hurled upward at terrific speed, but his head struck a support in the tower, and he was immediately killed.

His example was followed by another ship's commander onboard, who was fortunate enough to reach the surface and was caught and saved by the salvage men.

Acting on his information, divers again descended and got into communication with the imprisoned men by means of Morse signals.

With great ingenuity the rescuers were able to insert through a water flap, which was temporarily opened from the inside, a flexible hose, through which air and also Bovril, chocolate, and other sustaining food was passed.

The entombed men never lost heart, although the chances were that they would never be got out alive.

At their request playing cards were sent down "to beguile the tedium of waiting," as one of them said.

Strong wires were put round the vessel, and as the submerged men were provided with air from above there was no need for them further to conserve their air bottles. These they utilised to blow out the oil fuel stowed forward.

With this gone, the vessel after a time drove upwards at high speed until her bow was well above water in a perpendicular position. Immediately a big hole was made in her by acetylene burners, and the 42 men were brought out and conveyed to an infirmary nearby.

It was about midnight when the submarine rose, and in the glare of the arc lights of the salvage ships they walked, or were carried, to the infirmary amid the cheers of scores of men who had been aiding them to escape death.

The submarine spat out fire and smoke, and the last man had not been long rescued before the vessel settled down and slid again to the depths of the loch.

The submarine had been below about 24 hours when Captain Goodhart made his ill-fated attempt, and altogether the party were down 57 hours before they were so miraculously saved. 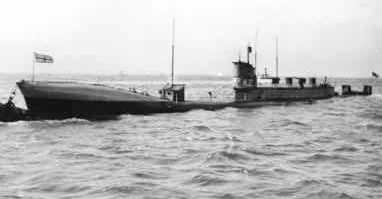 The submarine was finally salvaged on March 15, repaired, and recommissioned as K-22 (right). She was eventually sold for scrap in December 1926 in Sunderland.

In Faslane Cemetery stands the K13 Memorial (above left), a simple grey granite obelisk set among the graves, to the Royal Navy and shipyard personnel who drowned in the disaster. The shipyard personnel graves are in a small group closer to the cemetery gateway.

Every year clergy and personnel from the Clyde Submarine Base at Faslane hold a memorial service in the cemetery.

Another memorial stands in the David Elder Park, Govan, next to the shipyard were the workers came from.

There is also a memorial to the disaster in Carlingford, New South Wales, Australia, paid for by the widow of Charles Freestone, a Leading Telegraphist on the K-13, who survived the accident to later emigrate and prosper in Australia.

This memorial was unveiled on September 10 1961 and has the inscription: "This memorial has been created in memory of those officers and men of the Commonwealth who gave their lives in submarines while serving the cause of freedom. It is called the K-13 memorial in particular memory of those lost in HM Submarine K-13."