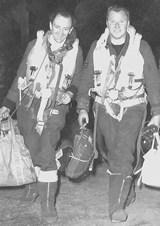 A HELENSBURGH airman who died when his plane was shot down over France during the Second World War is commemorated on the war memorial in Hermitage Park.

Much is known about the last two months of the life of Sergeant (Air Gunner) Campbell Lowrie, who was born in 1912, the son of John Lowrie and his second wife, Jessie.

Norman Hood, who lives at Gipsey Bridge in Lincolnshire, uncovered the information while investigating the history of his father, Flight Sergeant Raymond Thomas Hood, who was a crewmate and the sole survivor when their plane was shot down on June 3 1944 at Longvilliers in the Pas-de-Calais department in the Nord-Pas-de-Calais region.

Campbell (right in picture) joined the crew of the Handley-Page Halifax Mark 3 heavy bomber MZ-604, W for Whisky, in November 1943 at RAF Rufforth in Yorkshire, and they were posted to 76 Squadron, part of RAF Bomber Command 4 Group, at nearby RAF Holme-on-Spalding Moor on March 14 1944.

According to a 1944 cutting from the Helensburgh and Gareloch Times which his family still have, he destroyed a Focker Wulf 190 fighter near Tergnier on his first operation. On his way to the target he had already exchanged fire with a Junkers 88.

The F.W.190 came in to attack from starboard, and Campbell (pictured left in 1935) told his pilot to take evasive action — and at the same time opened fire.

“The fighter,” he was reported as saying, “seemed to lose speed and hover. Then it caught fire, turned over, and went straight down. We saw it hit the ground, and explode.”

The day after they joined the squadron they bombed Stuttgart, and other targets that month were Frankfurt, Berlin, Essen and Nuremburg.

On May 31 they bombed the Trappes marshalling yards near Paris where they were to be shot down two nights later after a June 1 mission to the Ferne d’Urville radar site near Cherbourg.

Norman Hood says: “Destroying Trappes was vital to the coming invasion as it was the main junction to either the Calais or Normandy beaches. At this late date, the enemy was still uncertain where the Allies would land. The marshalling yards were also packed with Panzer tanks.

“This was to be the final air attack of the Transportation Plan prior to the invasion of Europe. Since beginning in early March, almost 9,000 sorties were flown by Bomber Command in 69 air attacks, with a loss of 198 planes.

“Thirty operations were required to complete the tour on Halifaxes. With only two operations for the crew to fly, they would have then been given a week’s leave before probably being posted as instructors to train up other crews.

“My father told me that on the night of June 2-3, the Germans were waiting for them. Just after they dropped the bombs over the target at Trappes and turned round west for home, an enemy flak searchlight on a hill caught them near Longvilliers.

“Then, while the aircraft was floodlit, a Messerschmitt 110 G night fighter was vectored in, flew towards and under the Halifax, opening up with vertically aligned 20mm cannons. The Halifax petrol tanks were hit then exploded, and it was all over in seconds. Seventeen other aircraft were hit in similar circumstances that night.

“This was a favourite tactic of many Nachtjagd pilots flying aircraft equipped with the upward firing ‘Schrage Musik’ weapon system. 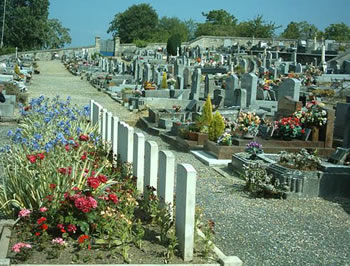 “Paradoxically, many of them believed that this method was more humane than firing directly at the fuselage since the bomber crew would have more time to escape.

“In fact, the opposite was true since the pilot often lost control of the bomber without any warning and the crew would have very little time to bail out.

“If the bullets hit non-vital parts of the fuselage, more hits would be needed before the structure was weakened to such an extent that it gave way and caused a failure serious enough to make further flight impossible. So it all depended on the situation.

“My father said that one minute he was standing in the nose putting out flames in the cockpit, then the next minute hurtling through the sky as the aircraft exploded, He landed heavily with burning wreckage falling on him.”

The rest of the crew did not get out, and all of them died when the plane crashed near to Longvilliers.

Norman’s late father told an Australian newspaper in response to an inquiry from the family of Flight Sergeant Caswell: “We had bombed the target and had been homeward bound for about five minutes when we were shot up by a German night fighter. We put on our parachutes and endeavoured to put out the fire which was burning underneath Smoky, the pilot.

“A moment later the plane went into a terrific dive, and I was knocked out. I regained consciousness at about 5,000 feet, having dropped about 11,000. My leg was badly smashed, so I conclude I must have left the plane very terribly, but how is a complete mystery to me.

“I opened my chute and landed fairly well, and was later taken prisoner. The plane was burning on the ground only a few yards from where I landed, so I conclude it must have dived straight into the ground.

“The end must have been very quick, and why I was not there with them is one of those things to which there doesn’t appear to be answer. I had the grandest crew in the world.”

The end of ‘W for Whisky’ was witnessed by a French villager, Jean Ricoux, and his wife who were woken by the noise.

He said in 2006: “We caught sight of an aircraft on fire, flying extremely low. It was being chased by aircraft which we could hear but not see. We quickly understood that it was a large plane being chased by enemy fighter planes with machine guns.”

They saw a bright glimmer of light coming from the nearby village of Longvilliers and rushed to the scene. He saw the aircraft had crashed in a field and was still burning, but the five young crew men were dead.

“They looked like they were sleeping,” he said. “It was a poignant scene that I shall never forget.

“I will always be very emotional and grateful to these aviators who, by sacrificing their lives, participated with their bravery and helped free our country.”

All six were buried in a communal grave in Bretigny-Sur-Orge Cemetery (above right), south of Paris. On it is stated: “In Memory of Sergeant Campbell Lowrie 1056079, 76 Sqdn., Royal Air Force Volunteer Reserve, who died age 22 on 03 June 1944, Son of John and Jessie C.Lowrie, of Helensburgh, Dunbartonshire. Remembered with honour.”

On June 3 2006, to mark the 60th anniversary of the crash, a memorial (left) was unveiled in Longvilliers, 12 miles west of Bretigny, a few yards from where the aircraft hit the ground.

“At each event the names of the crew members are slowly called out, and the villagers respond with 'Thank you'.”

Norman has tracked down descendants of Campbell, who live in Newton Mearns, Glasgow, and they were able to supply some more information — including the fact that he regularly travelled from Helensburgh to visit his Glasgow relatives.

Campbell was the youngest of three sons and two daughters of John Lowrie's second marriage, and there were one son and four daughters of the first marriage. The family home in Helensburgh was a very small ground floor flat at Portland Place, 46 John Street, and John Lowrie died in 1938.

After leaving school Campbell followed his oldest stepbrother in joining a burgh firm of joiners, serving his apprenticeship with William Gilchrist and later being employed by Alexander Reid, joiner, Colquhoun Street. In the early days of World War Two he volunteered to serve, and it is believed he lied about his age.

After word came through that he was missing, the Helensburgh and Gareloch Times stated: "It is hoped that his mother, who lost her husband in 1938, will soon have good news of him, and much sympathy will  be felt for her in this anxious time.

"Four sons served in the last war, one of whom was killed, and now in addition to Sergeant Lowrie she has a son-in-law serving, and four grandsons."

Campbell's name is on the Cenotaph in Hermitage Park, and on the other side of the war memorial is the name of an older brother, Kenneth Campbell Lowrie, who died in 1917 at the age of 17 during the First World War.

Kenneth, who was in the Royal Scots Fusiliers, lied to get into the army and was reported as being 19 when he died in Palestine.

He was buried in the Ramleh War Cemetery in the town of Ramla in Israel. It is maintained in perpuity by the Commonwealth War Graves Commission and is on a plain looking towards the hills of Judea in the general direction of Jerusalem.

Another brother, Alexander (Alec) served in the Royal Navy during World War Two as a ship's cook. He moved to England and the family never heard of him again.