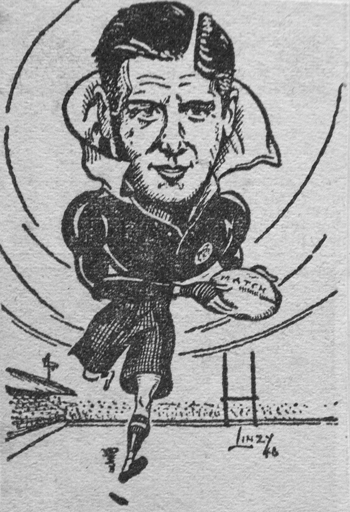 A HELENSBURGH man whose international rugby playing career was interrupted by the Second World War went on to become a top referee.

The late W.Copland W.Murdoch, or Copey to all who knew him, played for Scotland both before and after the war, and his name became famous in Scottish rugby circles.

He played for Hillhead High School FP, and in 1939 broke the record for the number of points scored in a season in Scotland with 264 points in an era when scores earned fewer points than they do today.

He was capped nine times between 1935 — when he scored a conversion for Scotland in their 18-8 defeat by the All Blacks at Murrayfield — and 1948 at wing, centre and full back, and would undoubtedly have won a great many more caps but for the war as it was 1947 before international matches resumed.

Copey went quickly from player to referee, and in 1951 he refereed his first international, the Wales v Ireland game at Cardiff. He also refereed a famous match between England and South Africa at Twickenhem.

Later he became part of the Scottish Rugby Union hierarchy, and until 1966 he was a member of the selection committee.

When the infant Helensburgh club was born in the early sixties when a group of former Hermtage pupils and others wanted to continue in the game after leaving school and formed a team, he gave his blessing and encouragement, and became honorary vice-president.

Born in Old Kilpatrick, Copey lived in Edinburgh for a time after he married his hockey internationalist wife Betty. They moved to Helensburgh in 1950, living first in West Montrose Street and later in St Michael’s Drive.

His working life was in banking. He joined the British Linen Bank as an apprentice in 1932, served in the army during the war, and then held posts in many different branches, including one as inspector of departments in the Edinburgh head office.

In 1956 he joined the branch in Gordon Street, Glasgow, and in 1970 the bank amalgamated with the Bank of Scotland. He became joint manager and then sole manager, completing 42 years service before retiring.

He said at the time that he was delighted to retire, and planned to spend his time golfing, gardening, and working for Helensburgh Lions Club — he was a member of that service club from its inception and one of its earliest presidents.

Copey was a very active member of the burgh community, and even served on the Town Council for one term of office, but did not seek re-election and was succeeded in 1966 by Norman M.Glen, who went on to become the last Provost of Helensburgh. He died in 1987 at the age of 73.

Sporting talent ran in the family. Both his son Robin and his brother were good rugby players, while his daughter Elizabeth — who now lives in Canada with her husband and family — reached the last eight of the Scottish junior girls tennis singles championship.