"Prompt at 3.30pm the siren blew and within a short time Helensburgh Fire Engine arrived at the pier, for a demonstration. The firemaster and a 10 man crew performed successfully." — it was reported in the Helensburgh and Gareloch Times in December 1920.

The 1906 extension to the municipal buildings had added in the fire station as well as the police office. As can be seen from the image (below), the fire station is to the left of the building, with the arched wooden doors.

Although the fire engine attended minor fires it was not until August 1921 that it was called out by the siren. On that occasion it was a slight fire in East Princes Street.

SN1549 not only looked after Helensburgh and district, it was also the County fire brigade and as such attended fires over in the Vale of Leven. It appears the fire engine was called out 32 times during 1923.

According to the Firemaster Report in 1925 the Brigade attended 38 calls, ten of which required the full resources.

A former firemaster, William Graham, who had left to go to Jamaica, died carrying out his duties as a firemaster in Jamaica.

Around the second half of 1929 a decision was made that it was more practical to buy a new fire engine than spend money refurbishing SN1549. A sum of £1,200 was allocated for this purchase.

In 1932 SN1549 was returned to the Dennis factory for reconditioning and then went to the Fire Brigade at Stalham in Norfolk. It remained in service there until the end of the Second World War and was then purchased by a local individual. In the mid-eighties this machine went to a "Bygone" Museum in Norfolk and was sold at auction to the current owner in March 2000.

When it was brought to Stalham it was driven all the way, and the story goes that because of the bad weather the driver, obviously in the open, almost needed resuscitation because of the wet and cold.

It was at Stalham during the 1939 war and made a daily journey into the Norwich City Centre, some 20 miles. There it sat outside a shoe shop ready for action. 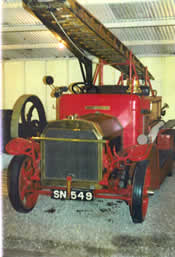 It was quite outdated by now and newer engines had come along, however, when on a journey with one of its newer rivals through glass-strewn streets, the newer model with its blown up tyres had a puncture, whilst the old girl managed to continue the call as the solid tyres created no problem at all.

After being retired from service at Stalham, it was brought by a fruit farmer at Clipsby in Norfolk. He had hoped to use it to spray and water his orchards.

Unfortunately for him the power of the water jets were far too much and the fruit trees would have been blown away. So finding another solution to his watering needs he stored it in an old fruit shed.

This is when Bob came across it, and being a restoration enthusiast he bought it to restore it to its former glory. Nancy Goodwin, the lady farmer next to Bob, collected the engine and brought it to Repps, Norfolk, by towing it with her tractor.

Now the restoration started. Stalham fire station by this time was coming up to their 150th year anniversary (1833-1983). The Fire Chief Gordon Archer was a close friend of Bob's and he asked if they could borrow it (along with another of his hand pushed fire-engines) to appear in the Norfolk Show. In return they were prepared to finish the restoration and painting.

They took it to their workshop at Hethersett and completed the job. It then drove to the Norfolk Showground with old time firemen on it, brass buttons and all.

It was some time later that Bob sold his huge collection of fire engines and traction engines to a friend who was opening up a museum "Bygone Village". Unfortunately the museum closed and all the engines were sold on.

SN1549 has recently undergone a full restoration. The engine has been rebuilt and is now back in a freshly painted chassis. This fire engine now resides in the North East of England.