A HELENSBURGH boy who emigrated to Australia at the age of just eleven went on to become one of the pioneers of early professional photography.

Despite being orphaned soon after arriving Down Under, burgh-born Thomas Mathewson (right) started a family dynasty in the photographic business.

The Mathewson family — his father, also Thomas, mother Mary Inglis, brothers John and Peter, and sister Mary — left their Edinburgh home late in 1852, leaving behind another son, Robert, a student at Edinburgh University, to set up home in Moreton Bay, Queensland.

Robert graduated with an MA, stayed in Scotland, and went on to become a senior master at several prominent schools. It is believed that he tutored Randall Davidson who became Archbishop of Canterbury, and married one of his daughters, Alison Ramsay Davidson.

A family story is that both parents had tuberculosis and hoped the sunshine and dryness of Australia would help their conditions, but there is evidence of this. They arrived in Brisbane on January 10 1853 on the vessel ‘America' from Liverpool, but within a year both parents had died.

The Moreton Bay Courier of Saturday December 16 1854 carried a death notice for his father — son of John Mathewson of Plewlands, Midlothian, and a gardener to trade — "after four months' painful sufferings, which he endured with Christian resignation". The following May his mother died.

For a few months in 1854 young Thomas, the only member of the family born in Helensburgh, attended the Anglican Church School in Nicholas Street, Ipswich, run by Alfred Hazelton. He learnt photography from the Rev Theophilus Beazeley in evening self-improvement classes at Ipswich, and from Mr Hazelton who was also a photographer.

After practising as an amateur Thomas took the brave decision to set up as a professional photographer at Toowoomba in 1861 and started travelling widely to take pictures.

In 1865 he trekked and took photographs all the way from Queensland to Sydney in New South Wales, arriving late in 1867. Then he set off northwards, spending four years at Gympie from 1868, and later to Rockhampton, Bowen, Charters Towers and Townsville before settling in Brisbane in the south east corner of Queensland.

Much later he wrote down — in a book entitled ‘A trip with my camera sixty years ago' — his recollections of these exciting travels, which required him to show real initiative and endure considerable hardship.

He wrote that he trekked through countryside "fully equipped with tents, one in which to photograph sitters, and another in which to live, together with all the needful paraphernalia of wet-plate photography, all packed in a two-wheeled vehicle drawn by two horses".

Peter joined him in 1876 and the firm became Mathewson & Co. until the 1890s, operating mainly from Queen Street, Brisbane, but making regular tours to country towns and rural districts.

Senior partner Thomas was stated in 1894 to have made a speciality of children and other pets. By then he was said to have left the 'tracks of his tripod' in every inhabited place from the Great Barrier Reef to the South Australian border.

In 1889 he had a new studio, and it was described as "a palace of photography indeed, with its glittering entrance gallery lined with golden show frames and its luxurious waiting room that is like the salon of a patron of the fine arts".

Because of a downtown in business, Peter set up on his own that year, and his son Thomas eventually took over the firm, so the name Thomas Mathewson was associated with two separate Brisbane photographic studios. 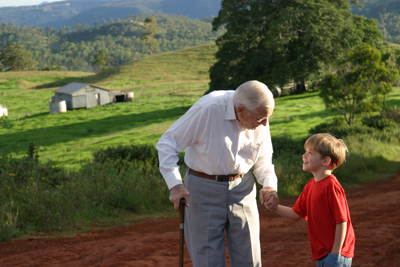 Thomas Snr eventually renamed his business the Regent Studios, where he was assisted by his son Jack. His other son, Thomas Jnr, called his father's business the Austral Studio when he inherited it.

Peter operated the Queensland Boot Palace nearby in Queen Street but eventually opened his own studio in Wickham Street in Petrie's Bight, shifting to several locations along Wickham Street following the demolition of the first building in 1918. He worked in partnerships with three of his sons and employed three of his daughters as retouching artists.

To this day descendants of the two brothers are professional photographers in Queensland.

One of them, Sharyn Mathewson, who is based in Toowoomba, said: "I am the daughter-in-law of Jack Mathewson, grandson of Thomas Mathewson.

“She did work experience with me at the newspaper and that sparked her interest in photography.

"It's interesting that there are still photographers in the family. My daughter Hannah recently won a prestigious photography competition with a photo (above left) of her brother Elijah and grandpa Jack Mathewson."

Jack, who is now 92 and has researched the family history as far back as 1660 in the Selkirk area, provided even more information about the photographic dynasty.

He said: "Thomas came to Toowoomba in 1864, but In January 1865 bought a horse and dray and two tents, one to live in and one as a studio, and set off into the country.

"He said that people were short of money at the time, so he set off to photograph people where they were and to take property photos. The stations he visited at that time were very large holdings, but the names of the properties are now the names of towns.

Jack said that his grandfather Thomas, who was born in Helensburgh on September 7 1842, married Jane Barker Reeve, who had emigrated from Northern Ireland, in Ipswich on September 22 1880. They had six children. 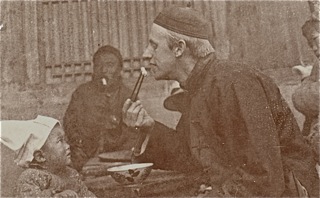 Eldest son Thomas Henry Reeve Mathewson — known as Harry — studied medicine at Edinburgh University, after being awarded a Carnegie Scholarship to study in Scotland, and was one of the few members of the family not to become a photographer, while Jack's father was Herbert Peter.

Their sisters were Ethel Mary, Jessie Inglis (known as Glis) and Alison Jane.

The youngest of the family was John Trevallon Mathewson, born on February 5 1892, also known as Jack, and it was he who was the next photographer in the family.

"He was in a Photographic Unit in the First World War," Jack said. "On his return he worked with my grandfather in the Regent Studio, and then in 1924 went to China with the China Inland Mission.

"When the Communists in the north were fighting the Nationalists in the south, missionaries were instructed to leave from Shanghai.

“John (pictured above right in China) had been working at Sining Fu near the Tibetan border, and he elected to leave via Tibet and was the first to cross Tibet into India. He returned to Brisbane in 1928 soon after his mother died."

Thomas, founder of a dynasty and 'the Grand Old Man' of Queensland photography, died in Brisbane on May 12 1934 at the age of 93, and his sons Thomas and John took over the business. 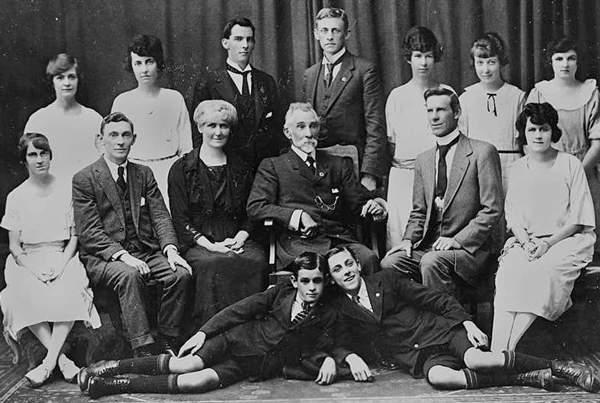 The picture shows Thomas Mathewson and his staff at his birthday party in 1922.