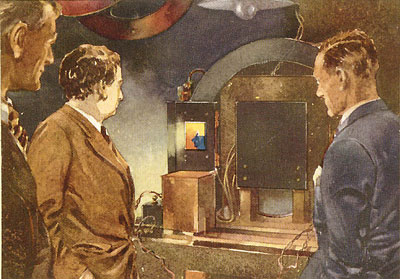 SOME 80 years ago, on July 3 1928, Helensburgh’s John Logie Baird achieved colour television for the first time.

The camera and receiver were modified versions of the mechanically scanned system first demonstrated by Baird in January 1926.

An image of the subject was scanned by a rotating disc containing three spirals of 30 holes; each spiral was covered with a colour filter; one red, one blue and one green.

The light passing through the spirals was picked up on photocells; the weak electrical signals were amplified and sent to the ‘receiver’ where the image was rebuilt by shining a lamp through another triple rotating spiral of holes with the red, blue and green filters.

The human eye actually saw a rapid succession of pictures in the three colours, but the ‘persistence of vision’ of the eye gave a mixing effect, so that the viewer perceived a coloured image. This was what is known now as a field-sequential system.

The system was too crude to work well with the human face. Instead, simple coloured subjects like strawberries and flowers — delphiniums and carnations — were televised.   As Baird remarked drily, the strawberries were particularly popular with his technical staff.

In September 1928 Baird demonstrated his new discovery to a scientific audience in Glasgow at the annual meeting of the British Association for the Advancement of Science.

He was also invited to give a public address in St Andrew’s Hall. He takes up the story with his characteristic self-deprecating humour . . .

“The lecture was a very grand affair with the Duke of Montrose in the chair and the Lord Provost and ‘nobility and gentry’ on the platform. It was a most outstanding event for me, the return of the native. The genius from the kailyard returns to lecture to the civic dignitaries.

“I arrived accompanied by Mr Denton. I had some simple apparatus to demonstrate; light sensitive cells and other similar phenomena, a collection of lantern slides and a completely unsuitable lecture, far too technical.

“It was, I learned later, completely incomprehensible gibberish to the bulk of the audience, but at the time I was happily unaware of this.

“On the platform sat Papa and my sister, the Inglis cousins and a few friends, with the Lord Provost and other worthies. The Duke of Montrose introduced me and did it wholeheartedly. He was a great amateur wireless enthusiast and had followed the development of television. 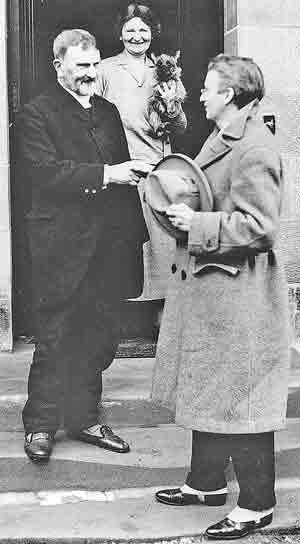 “The introduction was immensely gratifying; even Papa was impressed. I got up and told the audience all about selenium, photo-electricity, scanning and synchronization, illustrated by lantern slides, with abstruse diagrams. They were dazed, but dauntlessly enthusiastic.

“After the lecture finished, a vote of thanks was proposed by the Lord Provost and received with prolonged applause.

“Friends and admirers and press representatives thronged on to the platform, and the occasion came to an end in a blaze of glory. It was an episode which would have delighted the heart of Samuel Smiles.”

Baird’s comments are taken from the book ‘Television and Me’ (Birlinn Press, Edinburgh). The picture is an artistic reconstruction done in 1949 of the demonstration at his company’s laboratory in London.

His wife had died in 1924 and he was being looked after by Baird’s older sister Annie.   She lived on until 1971 and became one of Helensburgh’s most respected citizens.

The Inglis cousins were descended from the brothers Anthony and John Inglis who had founded the great shipbuilding company of that name.

A. & J.Inglis built the Maid of the Loch which can still be seen moored at Balloch pier, and may yet sail again — as permission in principle has now been granted by the Maritime and Coastguard Agency, the regulatory authority.

In the early 1920s the wealthy Inglis cousins provided Baird with crucially important financial help for his early television research.

Soon after his lecture at St Andrews Hall, Baird visited Helensburgh, and the picture (left) shows him greeting his father and Annie at the front door of his birthplace, The Lodge. Annie is holding up her Cairn terrier ‘Jinkie’ to whom she was devoted.

Baird’s prosperity is reflected in his immaculate attire which includes spats. On the other hand his father has just stepped out of the door and is still wearing his bedroom slippers.

Baird’s triumphal visit to Helensburgh in 1928 took place four years after his visit to the town to attend his mother’s funeral. Four years later, almost to the day, he was again in Helensburgh, but this time for his father’s funeral.