HELENSBURGH Heritage Trust, very conscious of the forthcoming bicentenary of Henry Bell's Comet this year, is helping to ensure that this important anniversary is marked in a major way in the Clyde area.

The 150th anniversary saw a Comet replica sailing across the Clyde from Port Glasgow to Helensburgh, with many associated events.

A celebration on that scale is not viable, and the Comet replica can no longer sail across the Firth because of modern health and safety regulations, but the Trust — while too small a body to organise a major event — is working to ensure that the bicentenary does not pass without appropriate recognition.

Trust chairman Stewart Noble wrote to over 60 Clyde organisations inviting them to attend a meeting which was held on Friday January 15 2010 in Glasgow's Museum of Transport. In the event some two dozen representatives of different organisations attended.

The aims of the meeting were to determine whether an organising committee for the bicentenary of the Comet should be set up, and if so, to appoint members to this committee.

A decision was made to form a committee, and it held its first meeting in Greenock in February when the respective Provosts of Inverclyde and of Argyll and Bute both attended. Further meetings have been held in Helensburgh, Greenock, the Clydeport building in Glasgow, and on board the Maid of the Loch steamer at Balloch Pier.

Meetings continue to be held at regular intervals to plan and co-ordinate events, seek funding, and prepare a marketing strategy. It is hoped that a number of small steam vessels will come to the Clyde to mark the occasion.

The first of a regular series of Newsletters was published in May 2011, with preliminary details of some of the bicentenary events, and the second in January this year. They are available as Downloads on this website's home page. A Comet Bicentenary website is now online.

The postcard below was produced in a limited edition to mark the centenary in 1912. 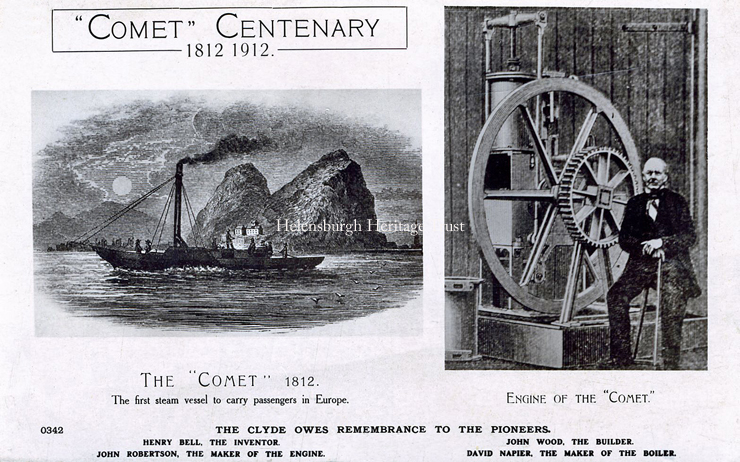